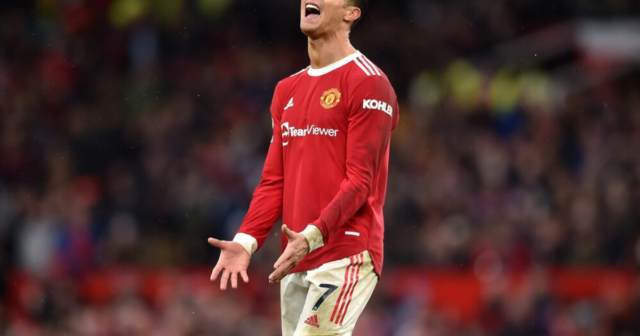 CRISTIANO RONALDO has failed to score in six games for Manchester United – but it’s not just his form in front of goal that makes for grim reading.

Manchester United’s 1-1 against Southampton saw Ronaldo somehow fail to score an OPEN GOAL and have an all-round shocker.

Ronaldo’s stats from the Southampton make for grim reading 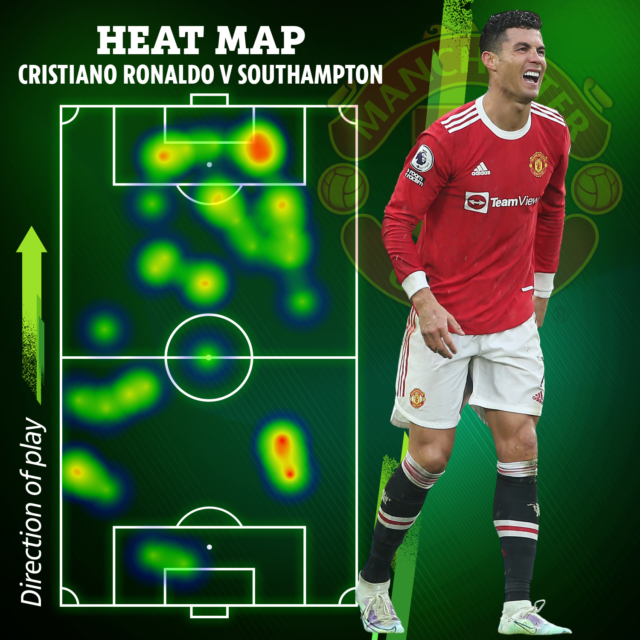 CR7 ghosted through the 90 minutes at Old Trafford

Across the entire 90 minutes Ronaldo only managed to muster fourteen passes of the ball.

His heat map was incredibly bare too, with CR7 struggling to keep up to grips with a fast-paced contest at Old Trafford.

Claims yesterday that Ronaldo has told his nearest and dearest he is feeling his age could be the explanation for his lack of involvement.

Just 33 touches across the entire 90 minutes go some way to proving how hard he found it hard to get hold of the ball.

The 37-year-old usually loves taking defenders on, but a meagre two dribbles of the ball against the Saints show he’s now less confident about beating his man.

Ronaldo losing the ball three times also suggest he’s finding it hard to retain the ball – another aspect of his game he’s normally so good at.

Ronaldo cut a frustrated figure yet again at Old Trafford 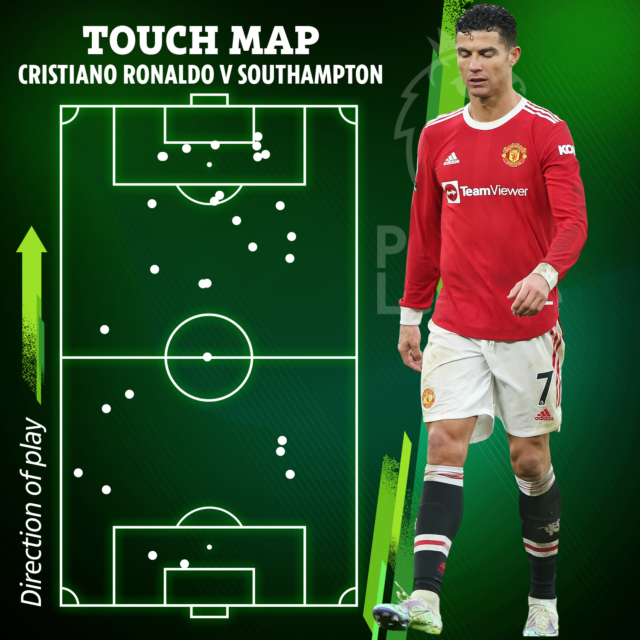 Ronaldo only managed 33 touches of the ball against Southampton

Seven of his 33 touches were inside the Southampton box, but even so he could only manage two shots in the match.

One of those was fluffing an open goal thanks to Romain Perraud’s goal-saving intervention.

And the other was a tame left-footed effort straight at Saints’ keeper Fraser Forster.

Ronaldo penned a two-year deal in the summer after making an emotional return to Manchester United.

But there are suggestions he could cut his stay short and leave the club in the summer after starting to feel his age.

The Portugal legend would never publicly admit that the demands of the English top-flight are becoming too much.

Nevertheless Ronaldo could decide to abandon what is turning out to be a frustrating second spell at Old Trafford.