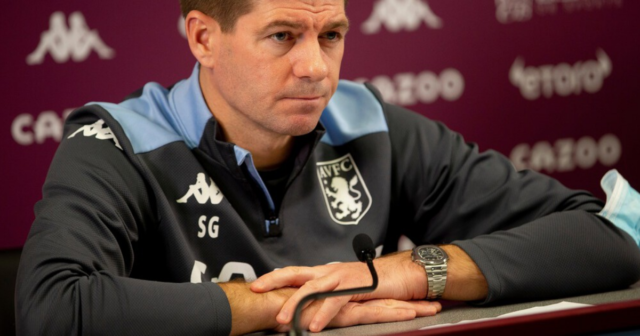 STEVEN GERRARD will miss Aston Villa’s next two games after testing positive for Covid-19, the Midlands club have confirmed.

Villa’s clash with Burnley was postponed just two hours ahead of kick-off last weekend following an outbreak within the squad.

And Gerrard, 41, is the latest staff member at the club to receive a positive test.

A club statement read: “Aston Villa can confirm head coach Steven Gerrard will be unable to attend our next two Premier League matches with Chelsea and Leeds United as he will be isolating after testing positive for Covid-19.”

Villa are set to host the Blues this afternoon, in one of six Boxing Day Prem matches to have so far survived.

Tottenham’s match against Crystal Palace is expected to be called off, however, taking that tally down to five.

Newcastle are then set to host Manchester United tomorrow.

This is the second time that Gerrard has missed matches due to having to isolate this season.

Earlier in the campaign, he missed clashes with Alashkert and Celtic while still managing Rangers.

Since ditching Gers for Villa, Gerrard has won four of his six matches at the helm – only losing to Manchester City and Liverpool

So far, 25 Boxing Day matches across England’s top four leagues have been postponed.

Three games are still set to take place in the Championship.

While just four have made it in League One.

The late postponement of Carlisle vs Rochdale last night made it three matches on in League Two, in a decimated Boxing Day calendar.

Did you miss our previous article…
https://www.sportingexcitement.com/football/premier-league/arsenal-star-granit-xhaka-was-almost-loaned-out-to-stoke-after-nightmare-start-at-gladbach-2