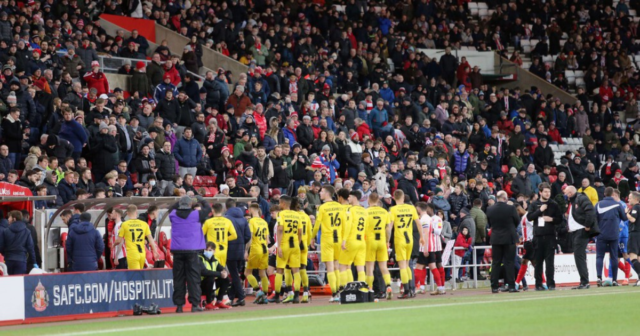 NEWCASTLE UNITED have paid tribute to a Sunderland fan that tragically died after falling ill at a match last week.

The Black Cats were facing Burton Albion at the Stadium of Light on Tuesday 22 February.

But the League One clash was suspended for around an hour after Michael Waggott received treatment from emergency services after collapsing in the west stand.

Paramedics raced to try and save the supporter before he was then rushed to Sunderland Royal Hospital.

However, Sunderland have now confirmed that Waggott passed away 48 hours later on Thursday.

A statement from the club said: “All at Sunderland AFC are incredibly saddened by the passing of lifelong supporter Michael Waggott.

“After receiving treatment from the Emergency Services during the first half of SAFC’s home fixture against Burton Albion, Michael was transferred to Sunderland Royal Hospital where he sadly passed away on Thursday 24 February.

“Our thoughts and condolences are with his family and friends at this incredibly sad time, and we will continue to offer them our full support throughout the next days and weeks.

“On behalf of Michael’s family, we commend the emergency services and our club staff and supporters for their response to the incident.

“Rest in peace, Michael. You will forever be red and white. You will be remembered, always.”

“The thoughts of everyone at #NUFC are with Michael’s family and friends at this time. Rest in peace, Michael.”

Advertisement. Scroll to continue reading.
In this article:blackcats, lastweek, thestadium