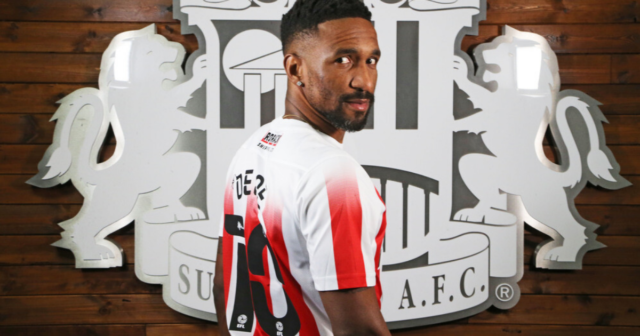 JERMAIN DEFOE could not stop smiling at his ‘special’ return to Sunderland.

His Wearside arrival as a free agent was confirmed at 1.38am on Tuesday — and it was emotional for more than one reason.

Jermain Defoe is overjoyed to be back at the Stadium of Light – and the club will donate £1 of every ticket sold to the Bradley Lowery FoundationLegendary striker Jermain Defoe became close pals with Bradley Lowery, who died aged six

As Defoe’s announcement video showed, the veteran striker, 39, is back for One Last Dance.

Revered at the Stadium of Light for his Premier League strike rate of 34 goals in 87 Premier League games between 2015-17, Black Cats fans have not been this excited about an incoming player for years.

But the former England hitman is loved for a lot more than the goals he plundered.

The bond Defoe struck up with Bradley Lowery pulled at the heartstrings of fans across the world and inspired millions.

‘Best mates’, the inseparable duo walked out at the Stadium of Light together on numerous occasions, with Defoe regularly pictured beside Bradley in hospital.

The youngster even led out England at Wembley alongside his hero three months before his death.

And The Black Cats will donate £1 from every ticket sold for this Saturday’s home clash with Doncaster Rovers to the Bradley Lowery Foundation.

Defoe had not played for the Three Lions for over three years but bagged the opener against Lithuania, leaving Bradley beaming and households up and down the land reaching for the tissues.

The bond between the pair was so strong  the marksman even dedicated a tattoo to the Blackhall lad on his forearm, reading ‘Brads’.

And the Bradley Lowery Foundation wasted no time in welcoming Defoe back as he signed a £6,000-a-week deal until the end of the season after leaving Rangers.

After his announcement, Defoe said: “I can’t stop smiling because this is a special move for me for many reasons. I’ve had so many messages saying, ‘remember when you said you would come back’.

“I said that I would one day and when I left, I wasn’t ready to leave.

“I have a special bond with the fans here and the club is in a fantastic position to get promoted.

“I want to be a part of more special times here and I’m looking forward to it.” 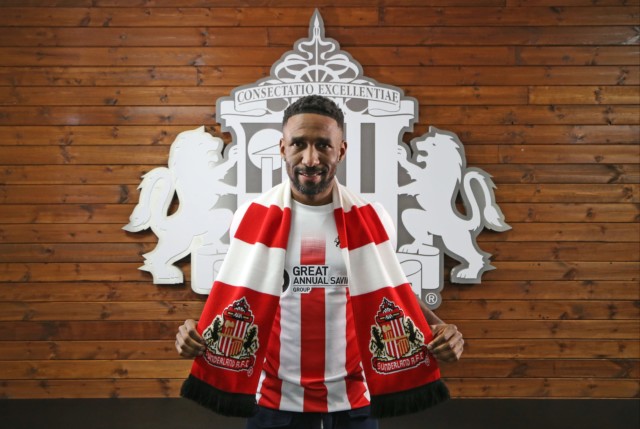 The club then released a statement from Defoe, which simply read: “I’m back.”

After being awarded an OBE in 2018, largely for the work of his Jermain Defoe Foundation, he devoted the honour to Bradley.

Since then he has raised money for children with neuroblastoma — a rare type of cancer that mainly affects youngsters — and other life-threatening illnesses.

He scored 34 league goals in 87 appearances for a side constantly battling the drop before leaving for Bournemouth following relegation in 2017.

Life has been grim for Sunderland ever since, and they face an almighty battle to escape League One at the fourth time of asking.

A 6-0 hammering at Bolton on Saturday left the Black Cats in third place and did for head coach Lee Johnson.

So while the mood was starting to sour as the club look for a new boss, the buzz is back — thanks solely to Defoe.

Black Cats sporting director Kristjaan Speakman said: “We all know how highly-regarded Jermain is amongst our fan base and within the wider community.

“He returns at a crucial time in our season, and we firmly believe that he can have a positive influence on and off the pitch.

“Jermain’s personality is infectious and his mindset is elite — he is a proven winner and a goalscorer.”

Defoe turns 40 in October and surely will not be expected to start every game.

But you can bet every League One defender will be scared stiff when he starts warming up.

And if his presence and goals inspire Sunderland to promotion, the word hero will not even start to cover Defoe’s Wearside legacy.