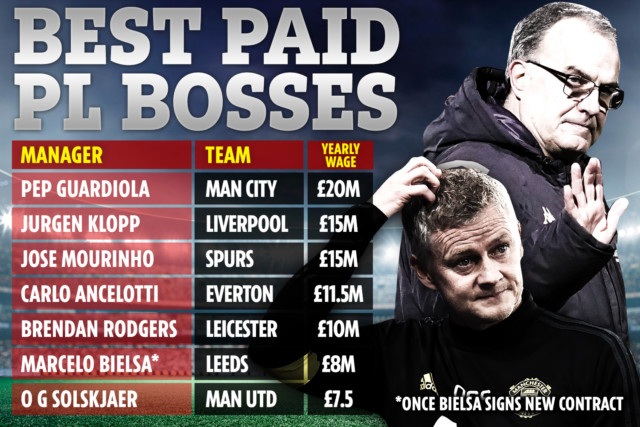 MARCELO BIELSA is on the verge of signing a new £8million-a-year contract – which will make him better paid than Ole Gunnar Solskjaer.

The Leeds boss, 64, is set to be handed a bumper new contract after ending 16 years of hurt by guiding the Elland Road side back to the Premier League.

Leeds gained promotion by winning the Championship title ahead of West Brom and Fulham, who came up through the play-offs.

With his side preparing for their Premier League opener against champions Liverpool, Bielsa is set to be rewarded for his incredible efforts.

And his new £8m-a-year pay-cheque – up from £6m per annum – will see him overtake a host of top bosses, including Manchester United chief Solskjaer.

In fact, Bielsa will become the SIXTH highest-paid boss in the Premier League.

His £8m would be just above Solskjaer’s £7.5m at mega-rich United.

However, the Leeds manager still trails the big-boys by some distance.

Did you miss our previous article…
https://www.sportingexcitement.com/football/premier-league/arsenal-joined-by-real-madrid-and-juventus-in-houssem-aouar-transfer-race-as-lyon-concede-they-may-have-to-sell