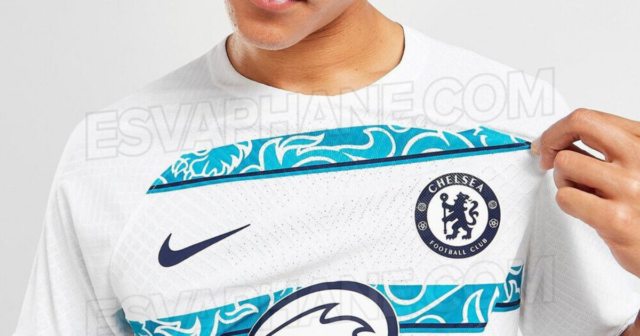 CHELSEA fans have been left divided after their new away kit appeared to be leaked online.

The Blues are gearing up for the 2022/23 season with a host of new names being linked to the club including Cristiano Ronaldo, Raheem Sterling and Matthijs de Ligt.

The new Chelsea away kit seems to have been leaked online

Blues supporters are unsure about the new look

But one acquisition the club’s supporters are unsure about is the new away strip which has reportedly emerged online.

Photos show a white kit with blue stripes going horizontally across the shirt.

And the ‘3’ sponsor remains on the kit for the new campaign.

Some angry Chelsea fans took to Twitter to voice their frustrations about the reported new strip.

One said: “Everything about this Boehly era is rubbish!!!”

Another furiously added: “I swear they have five year olds designing our kits.”

And a third said: “Why is light blue being incorporated in both the home and away kit, has no relevance to us?

But other Chelsea supporters feel the kit may well be a success if they do wear it next season.

One fan responded: “This is actually really nice.”

While a second person said: “Finally a Nike kit for Chelsea that I am down with.

“NGL it looks really good, but I gotta see the full kit with shorts and socks before I give the final verdict.”

However, the Dutchman is now thought to prefer a move to Bayern Munich.

Did you miss our previous article…
https://www.sportingexcitement.com/football/premier-league/christian-eriksens-staggering-contract-demands-revealed-after-he-agrees-man-utd-free-transfer/