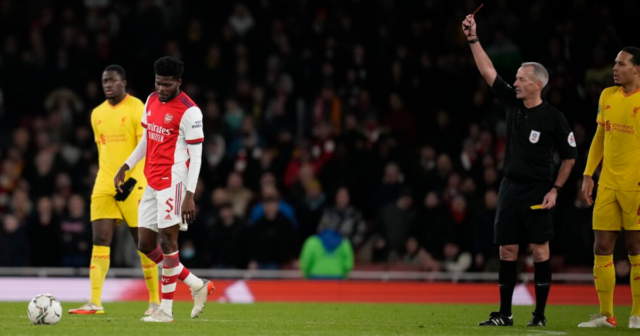 THOMAS PARTEY added to a miserable week after getting sent off in Arsenal’s 2-0 defeat to Liverpool.

The midfielder, 28, was brought on as a late substitute but lasted just 15 minutes.

He received two yellow cards – the second for a tired, late foul on Fabinho with Arsenal trailing 2-0.

It added insult to injury for The Gunners and was a rather fitting way for Partey’s week to end.

Just two days ago Partey was knocked out of the Africa Cup of Nations after Ghana lost to Comores, finishing bottom of their group.

Arsenal fans thought that was good news as it meant Partey would not have missed a single Premier League game – but he will now sit out the Burnley match on Sunday through suspension.

Partey woke up in Cameroon on Thursday and landed in London just seven hours before kick-off.

But he failed to help Arsenal find an equaliser when he replaced Emile Smith Rowe.

And his actions only created a further headache for Mikel Arteta – who had praised the midfielder ahead of the match.

Arsenal are down to bare bones in midfield so the Arsenal boss was grateful for Partey’s commitment.

Arteta said: “He (Partey) showed his commitment. He is really disappointed to get [knocked] out of the AFCON, but straight away, he said, ‘I want to be involved’.

“He landed at midday & went straight to the hotel & he wants to be there on the bench to help.”

Did you miss our previous article…
https://www.sportingexcitement.com/football/premier-league/married-everton-footballer-arrested-on-suspicion-of-child-sex-offences-has-bail-extended-for-fourth-time