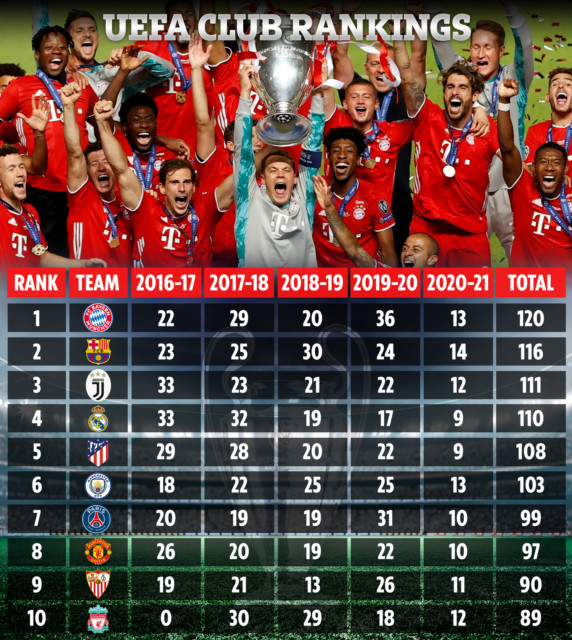 LIVERPOOL are the reigning Premier League champions and are just over a year removed from their 2019 Champions League glory.

But despite that, Uefa have Jurgen Klopp’s down in TENTH in the European rankings.

The Reds reached the Champions League final in 2018, losing to Real Madrid – before lifting ‘Ol’ Big Ears’ a year later.

In spite of their recent successes though, Uefa have Liverpool tenth due to system by which the rankings are calculated.

Uefa use a five-year rolling system to devise the rankings, with the current standings based on performances in Europe from 2016-17 onwards.

The Reds finished eighth in 2015-16 as Brendan Rodgers was sacked and replaced by Klopp, meaning the club fail to even secure a Europa League berth.

That loss of points sees them down in tenth in the current rankings.

But next season, with 2016-17 removed, Liverpool are likely to shoot up to at least THIRD next season.

The Germans have four more coefficient points than second-placed Barcelona.

Atletico Madrid and Manchester City come in fifth and sixth respectively, with Paris Saint-Germain in seventh.

Manchester United rank eighth, despite spending TWO seasons in the Europa League during the current cycle.

They received a points boost in 2016-17 after winning the second-tier tournament.

With the Reds already into the knockout stages this season and 2016-17 set to be wiped off Uefa’s books, they’ll look forward to a huge jump up the rankings in a year’s time.

Celtic are the only other British club in the top 50, sitting in 49th – with Leicester 51st.