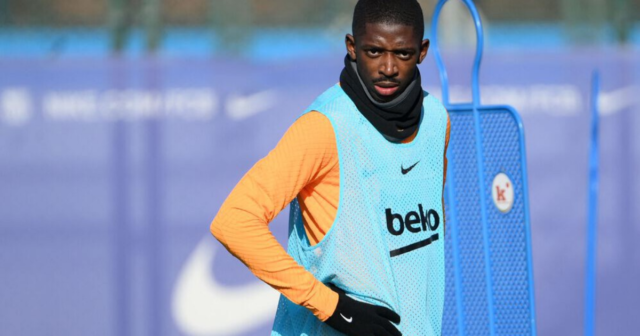 TOTTENHAM could be about to launch a deadline day bid to bring in out-of-favour Barcelona star Ousmane Dembele.

But they face a last-minute transfer battle with a host of European giants if they are to land his signature.

And Marca reports the moneymen of Paris Saint-Germain are also in the mix for the 24-year-old.

Dembele is out of contract at the end of the season, but his wage demands have so far blocked any January move.

The France international is thought to have refused to take a paycut to leave the Nou Camp and is determined to maximimise his earnings until his contract is up.

Dembele’s representatives have also hinted he could be interested in renewing with the Catalans, with a five-year offer still on the table.

The contract saga has infuriated new boss Xavi, who wants the forward off his books so he can sign more strike options.

However, the loan arrival of their academy product Adama Traore from Wolves suggests Dembele’s time in Spain could be up.

Spurs thought they had a deal in place but a falling out between the player and manager Antonio Conte led the rampaging 26-year-old to opt for Barca instead.

A host of Premier League clubs have expressed interest in Dembele as they look to bolster their goalscorers for the business end of the season.

But on Sunday reports emerged the ex-Dortmund talent had reached a ‘verbal agreement’ to head to his native France with Ligue 1 leaders PSG.

Did you miss our previous article…
https://www.sportingexcitement.com/football/premier-league/mason-greenwood-still-being-quizzed-by-cops-today-on-suspicion-of-rape-and-gbh-after-being-suspended-from-man-utd