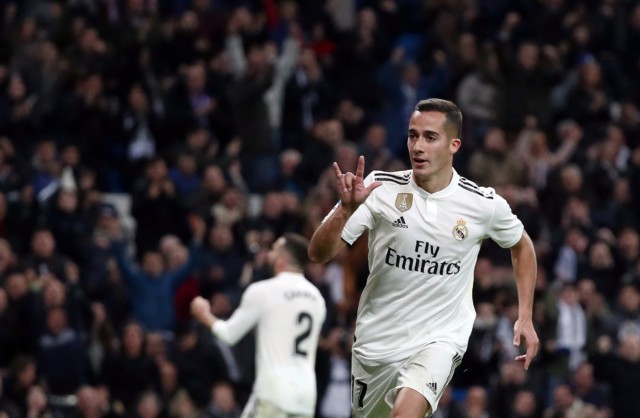 TOTTENHAM HOTSPUR are eyeing up a £15million move for Real Madrid winger Lucas Vazquez, according to reports.

The 28-year-old has struggled for form and fitness this season, and currently finds himself out with a calf injury.

Lucas Vazquez has made 201 appearances for Real Madrid

He has made 201 appearances over the last five years, helping his side to three Champions League triumphs and a LaLiga title – although he now has just a year left on his contract.

This has lead to speculation surrounding his future – especially given that he has only started six of Real Madrid’s 32 league games so far this season.

Talks over an extension are believed to be at an impasse and according to Mundo Deportivo, Spurs are looking to take advantage.

They claim that the North Londoners hope to sign the out-of-favour attacker for £15m, while Madrid would rather try and hold out for £22.5m.

Vazquez has also been linked with Chelsea and Arsenal in the past, and recently revealed that the Premier League would suit his “personality”.

He told The Guardian: “The dream is to retire at Madrid but in football, you don’t know.

“When I was little, I always watched the Premier League with my brother. It was, it is, very attractive: a nice football to play, one that could fit my characteristics and personality well.

“I have a basis [of the language] already and I watch series in English, read a bit, study grammar. I’ve been doing it for a year and a half.”

Tottenham already have a number of wingers at the club, with Steven Bergwijn having arrived in January.

Vazquez, who has that trio of Champions League medals in his cabinet already, would likely have to go without playing in the competition at all next season should he move – with Spurs currently sitting in seventh.