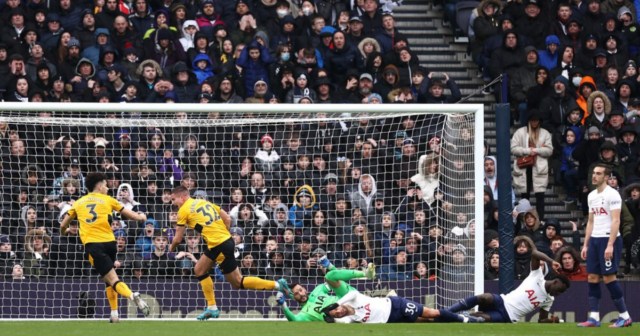 TOTTENHAM fans ignored their club’s orders by chanting the Y-word in the first minute of their match against Wolves.

Spurs were playing for the first time since a statement posted on Thursday asking their supporters to stop using the term.

But a large section of the crowd inside the Tottenham Hotspur Stadium refused to follow the request.

There were loud chants of: “Thing I love most is being Y**.”

This was followed by: “We’ll sing what we want.”

And another rendition of ‘Y** Army’ was belted out by the home faithful, who saw their side slide 2-0 behind early.

Tottenham supporters adopted the Y-word in the 1970s as a badge of honour in response to repeated anti-Semitism from rival fans.

Spurs have long been associated with a large Jewish fan base, with some waving the Star of David as a signal of that heritage.

In a statement to supporters on its website, Spurs said: “We are living in times of heightened awareness of cultural appropriation and sensitivities.

“It is therefore crucial to the values of our club and our fans that we are even more mindful of the controversial nature of this term.

“We have always maintained that our fans have never used it with any deliberate attempt to offend.

“Indeed, among the reasons some fans choose to continue to chant the term now is to show unity and support for the team, as well as each other, as a defence mechanism against antisemitic abuse that still exists and also as a way to identify as a Spurs fan.

“Outside of a football setting, however, an overwhelming majority of our fans acknowledged that the Y-word can be considered as a racist term and that they would therefore not use it in such a context.“

Tottenham conducted two surveys of fans and revealed: “Members of our fanbase feel uncomfortable with the Y-word’s continued use at matches.

“Supporters who were prepared to defend their position on why they use the term expressed an openness to its use being reduced if it caused offence to fellow fans.“

The club pointed to other sports clubs – such as Exeter Chiefs in rugby union and US sporting franchises – who have changed nicknames and badges to reflect modern sensitivities.

Tottenham continued: “The adoption of the Y-word by our supporters from the late 1970s was a positive response to the lack of action taken by others around this issue.

“Our supporters’ use of the Y-word should never be cited as an excuse for the real evil that is antisemitism.

“The adoption of the term was a direct consequence of the lack of action taken in the past on this matter.

“An increasing number of our fans now wish to see positive change again with the reduction of its use, something we welcome and shall look to support.

“There is a growing desire and acknowledgement from supporters that the Y-word should be used less or stop being used altogether.

“We recognise how these members of our fanbase feel and we also believe it is time to move on from associating this term with our club.”

Did you miss our previous article…
https://www.sportingexcitement.com/football/premier-league/west-ham-centre-back-kurt-zouma-filmed-kicking-and-slapping-his-pet-cat-in-shocking-video