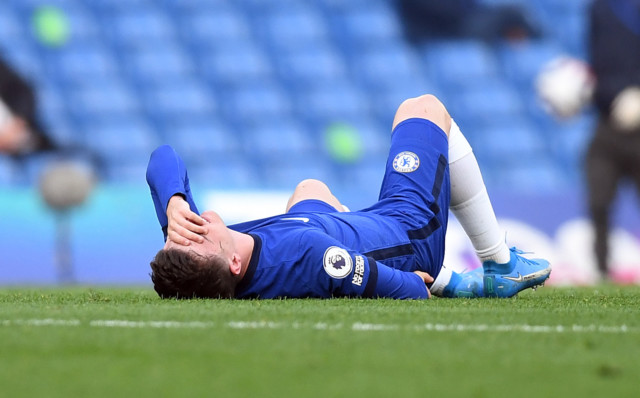 CHELSEA boss Thomas Tuchel is not sure whether Mason Mount will be fit enough to play in Wednesday’s Champions League semi-final second leg against Real Madrid.

Mount, who put together another impressive display for the Blues, was hauled off in the closing stages of Saturday’s 2-0 win over Fulham at Stamford Bridge after picking up an apparent back injury.

Chelsea star Mason Mount picked up an injury against Fulham

The midfielder was in visible discomfort when he landed badly onto his back after a collision with Mario Lemina.

Chelsea manager Tuchel discussed the England international’s injury after full-time and admitted he doesn’t know whether he will be available for the crunch clash with Real at Stamford Bridge.

The German manager said: “I hope really that Mason is not a big thing and hopefully he can fully recover for Real Madrid.

“It was my decision, there was not any doctor or physio who told me to take him off.

“But I saw him landing hard and it was the moment anyway when we wanted to take him off anyway.

“I saw him holding his back slightly, so we didn’t want to take any risks but I have no other information on that. He has the full package, mentally, in terms of talent and physically.

“And the most important part is his character, he has his feet on the ground and he’s a nice guy. He comes to Cobham every day to learn something new and have new experiences.

“He is the guy who can recover very fast, he’s a very physical player and is fully adapted to Premier League football. He has big self-confidence in a very, very positive way.

“It’s a pleasure to have him, be at his side and guide him and support him. It’s impressive, he’s not affected by all the praise.

“This is maybe the most important part. He seems to be a guy who likes the sport, and feels an obligation to make the most out of it. And he wants it absolutely badly, so it’s a top mix.”

Chelsea have a good chance of advancing to the Champions League final after drawing 1-1 with Real in the first leg where Christian Pulisic scored an away goal before Karim Benzema’s equaliser.