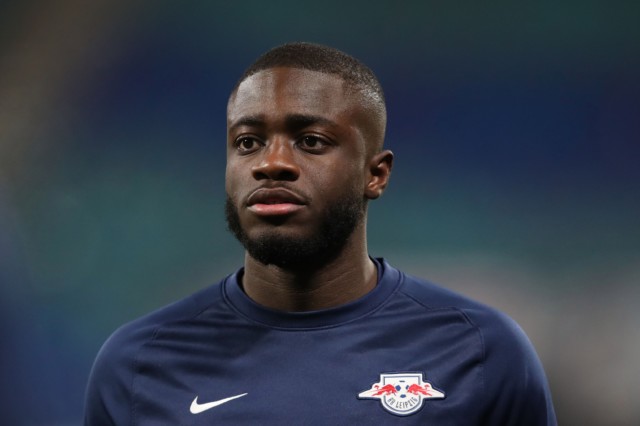 DAYOT UPAMECANO’S agent has confirmed the sought-after centre-back is deciding on his future with two top Premier League clubs vying for the RB Leipzig star.

Both Manchester United and Chelsea have been linked with the highly-rated 22-year-old but the Prem sides will face competition from Bayern Munich.

Upamecano has a contract until 2023 at the German side but the player’s representative Volker Struth confirmed he has a £38million release clause, which is likely to be triggered this summer.

Struth told Sport1: “The release clause was agreed because the player decided to want to take the next step at some point. It is very likely in the summer.

“Nothing final has been decided yet. The tendency for him to leave the club in the summer is high.

“The release clause is £38m. That is an insane sum in coronavirus times.

“In summer 2019 it was something else. The proportions of the transfer fees have changed.  I believe that some clubs have to say goodbye to the market values ​​when they sell players.

“[Apart from the Bundesliga] only the English league is in consideration. The Spanish clubs that were eligible are currently financially unable to do so.

“It’s no secret that there are two interested parties from the Premier League. A decision will be made and announced in the next few weeks.”

Upamecano has grabbed headlines since swapping RB Salzburg for Leipzig in 2017 and is in talks with Bundesliga giants Bayern.

Struth confirmed sporting director Hasan Salihamidzic is driving their pursuit of his player.

He added: “Hasan Salihamidzic is really trying and has found the right temperature in the talks.

“There is not too much pressure in there. Nevertheless, it was emphasised that they are very interested in him.”

After Bayern’s 4-1 win over Hoffenheim on Saturday, Salihamidzic divulged: “We are having dealings with him.

“We have met with his agent and had good, professional discussions.”

United have still been linked with a £55m move to prise Upamecano away in this window but with time running out a deal looks more realistic at the end of the season.

Ole Gunnar Solskjaer was thought to have edged out Liverpool boss Jurgen Klopp in the race to snare the France international – with the Red Devils keen to partner Upamecano with skipper Harry Maguire.