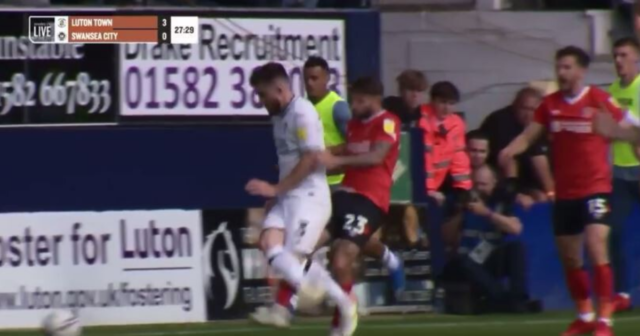 The 30-year-old somehow escaped with just a booking after completely wiping out Ryan Manning at Kenilworth Road on Saturday.

Thoughts on this incident in the dramatic Championship clash between Luton Town and Swansea City? 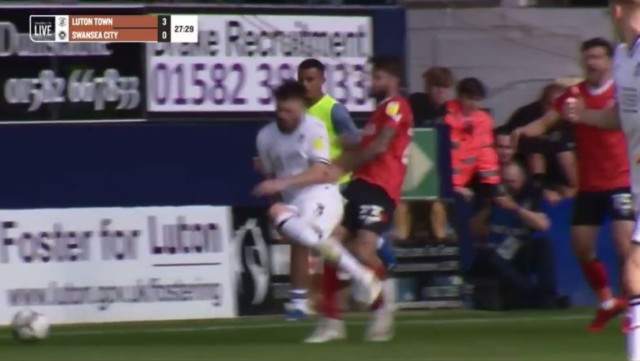 Swansea may have came from 3-0 down to snatch a draw in injury time, but it was Lansbury’s swipe which was one of the main talking points from the match.

With the Hatters three up against the Welsh outfit, Lansbury, who came through the Gunners‘ academy, attempted to take a quick free-kick.

But left-back Manning slowly walked over to the ball to knock it away to slow the game down.

However Lansbury still attempted to proceed with restarting the action quickly, but instead of connecting with the ball, he wiped Manning off of his feet.

Lansbury pleaded innocence where he claimed he didn’t see the defender in his vision as Swansea players rushed over to confront him.

After tempers cooled, the ex-Aston Villa man was booked for the incident, while Manning also received a yellow card for encroachment.

Fans were left shocked on social media at how Lansbury wasn’t given his marching orders, while Manning also commented on being clattered.

Taking to Twitter, the Irish international quipped: “Anyone find a shin floating about Luton let me know.”

Commenting on the clip of the incident, one fan messaged: “This is disgusting! Henri Lansbury for Luton DID NOT get a red card for this..????”

Another posted: “Most blatant red I’ve ever seen ahaha.”

Former Tottenham midfielder Jamie O’Hara believed it wasn’t Lansbury’s fault, as he stated: “Got in the way of a quick free kick so got what he deserved.” 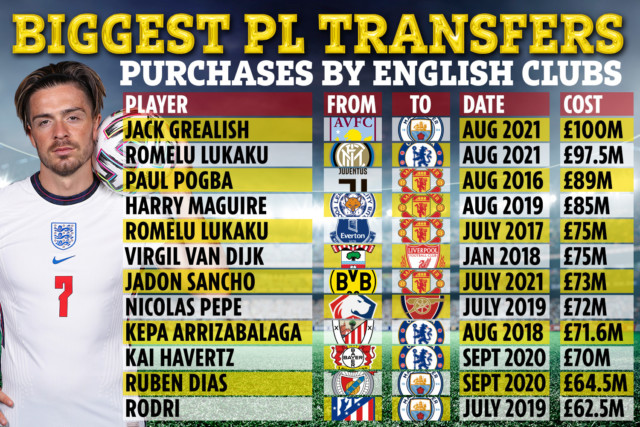 Though another user said: “What was Lansbury trying to do? Boot the ball out of the stadium? That was a straight malicious red card effort.”

Meanwhile one supporter tweeted: “How tf has Lansbury not been sent off.”

Another remarked: “Henri Lansbury’s hack at the Swansea player is such an obvious red that I can’t help but laugh at it.”