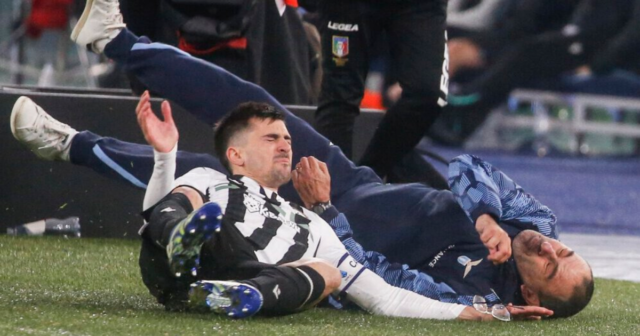 MAURIZIO SARRI will be waking up with a sore head after the Lazio boss was left flattened by an Udinese player on Tuesday night.

Former Chelsea boss Sarri may well decide to start standing a little further back in his technical area after being sent flying by on loan Watford man Ignacio Pussetto.

Sarri was sent tumbling to the deck while on the sideline
The Lazio boss was left upended after the collision, which was so forceful it knocked his glasses off his head 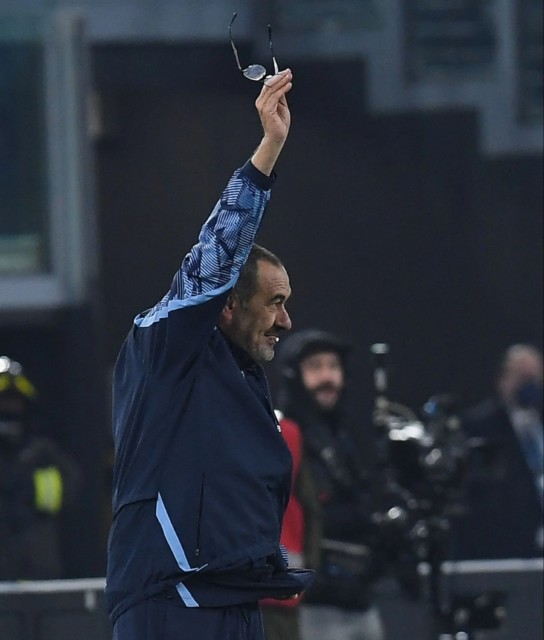 Sarri saw the funny side though, holding his glasses up to the crowd after recovering them from the floor

Sarri was right out on the edge of his area as Lazio edged past Udinese in the Coppa Italia 1-0 after extra time.

And the 63-year-old watched on as Manuel Lazzari and Pussetto tussled for the ball in front of him.

Lazio man Lazzari won the battle, but inadvertently sent Pussetto careering towards Sarri, who could not react in time to get out of the way.

The ex-Blues boss was helpless as he took Pussetto’s shoulder right to the chin, with such force it sent the Italian’s glasses flying off his face.

He too went tumbling to the floor and landed heavily, in what looked like an extremely painful collision.

Luckily for Sarri there was no lasting damage, and he didn’t hold a grudge either, as he embraced an apologetic Pussetto at full time.

Sarri had the last laugh anyway, as a Ciro Immobile strike in the 106th minute helped his side progress to the quarter-finals of the Coppa Italia.

He even found time to joke about the incident in his post-match press conference, saying: “It was a good test of my current condition! I’d like to point out that I was the one who got back up first.”

Sarri has been boss of Lazio since June, having previously spent a year with Juventus.

Before that he was at Chelsea for the 2018/19 season, helping the Blues lift the Europa League trophy.

He took over from Antonio Conte after his fellow Italian spent two successful years at Stamford Bridge.

But he left after being offered the Juventus job, and also cited wanted to be close to his elderly parents in Italy as a reason for leaving.