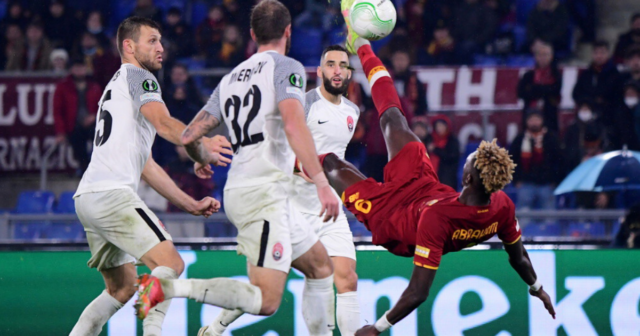 The former Chelsea star swapped Stamford Bridge to reunite with his old Blues boss Jose Mourinho in Italy over the summer.

Tammy Abraham scores his second of the match with a brilliant overhead kick!! 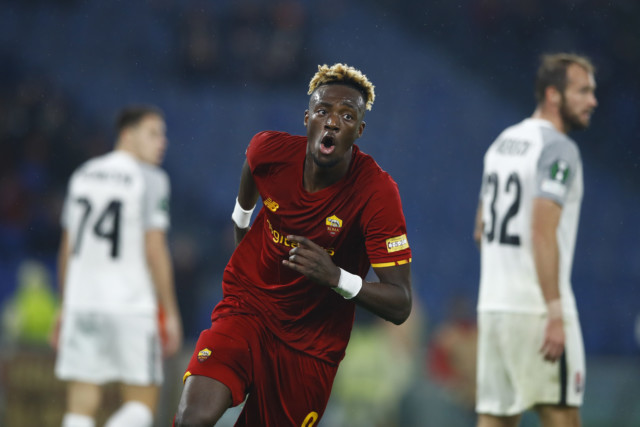 Abraham, 24, is quickly becoming a firm favourite with the Serie A side’s supporters after an impressive start.

And he further cemented his hero status with two goals in Europe on Thursday night – including an acrobatic second.

Carles Perez and Nicola Zaniolo had given Roma a 2-0 lead at the break against the Ukrainian outfit at the Stadio Olimpico.

Within seconds of the restart, the England international then got his first of the evening and his team’s third.

But his shining moment came with just over 16 minutes remaining.

After a team-mate’s shot was deflected, the towering powerhouse somehow managed to adjust his body before launching himself up into the air.

He connected perfectly with the ball as his overhead attempt whizzed straight past the goalkeeper and into the net.

That was his seventh goal for Roma in 19 appearances since his transfer.

It was also a vital win for Roma in their bid for Europa Conference League glory.

They are now just a point behind group leaders Bodoe/Glimt, who embarrassed Mourinho’s men recently by thrashing them 6-1.

Did you miss our previous article…
https://www.sportingexcitement.com/football/premier-league/eric-cantona-claims-he-is-the-new-man-utd-manager-to-replace-ole-gunnar-solskjaer-on-instagram