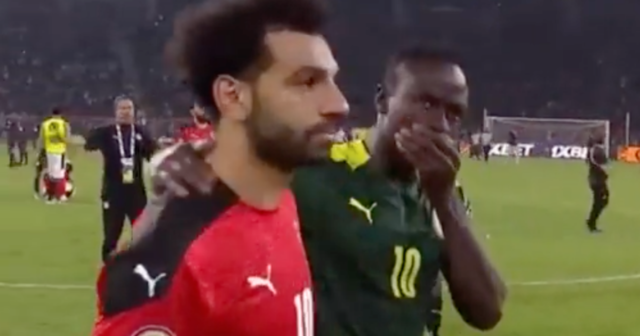 Liverpool pals Mane and Salah went head-to-head in the Afcon showdown, and after agonisingly losing on penalties the latter couldn’t help but shed a tear.

He might have won it for Senegal, but Sadio Mane made sure to console his Liverpool teammate after winning the Africa Cup of Nations

Mane was quick to comfort him though, and offered words of encouragement to the devastated Egyptian King.

He classily took a break from Senegal’s wild celebrations to have a quiet talk with his club colleague.

Mane may have scored the winning kick in the shootout, but things could have been so different given the way the opening minutes of the game played out.

Senegal were awarded a penalty just three minutes into the game, which Mane stepped up to take.

His effort was saved by Egypt stopper Mohamed Gabaski, with Salah playing a huge role in Mane’s initial failure.

He spent time talking to Gabaski before Mane stepped up, telling him which way Mane was going to shoot.

At one point Mane even came over and seemed to join in the mind-games.

The Egypt shot-stopper duly saved, and from there it seemed written in the stars for Egypt to claim a record eighth Afcon title.

Especially when the game finished 0-0 after extra time.

Given Egypt had progressed through the last two rounds on penalties, they had to be the favourites going into the spot kicks.

But after two Egypt misses Mane made no mistake when when it came to taking the decisive kick, cuing tears from Pharaoh’s skipper Salah, who was due to go next.

The two star forwards will now head back to Merseyside as they switch their focus back to Liverpool duty.

The Reds are still fighting on four fronts this season, with Jurgen Klopp’s side currently nine points behind Premier League leaders Manchester City, but with a game in hand.

Klopp and Co are also still standing in the Champions League and FA Cup, and have the League Cup final to contest later this month against Chelsea.

It means Mane has every chance of adding another winners medal to his Afcon award, while Salah will be desperately seeking silverware with his club to ease the pain of Sunday’s defeat.

And Klopp is ready to throw both straight back into action when they return to Merseyside.

The German said: “These two boys are real warriors. They are constantly ready, they are both not worried about holidays or days off. I never heard them ask about it.

“So with these two boys it is really simple. I know they want to play immediately but ­together with them we have to find out how much sense it makes.

“You can imagine both want to play against Leicester, to score goals and win games for Liverpool.

“But it’s a few days until we have to make a decision.”

Did you miss our previous article…
https://www.sportingexcitement.com/football/premier-league/watch-boreham-wood-hero-and-everton-fan-kane-smith-celebrate-sealing-goodison-tie-in-tony-hibbert-shirt-after-upset