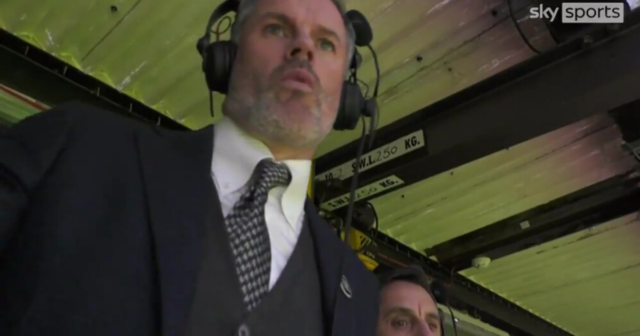 Carragher, 43, was on commentary duty for Sky Sports at Old Trafford, but couldn’t help celebrating when Salah scored his third and Liverpool’s fifth just five minutes into the second half.

The Reds went in at half-time 4-0 up thanks to goals from Naby Keita, Diogo Jota and a Mo Salah double.

And the Egyptian put the icing on the cake by finishing off his hat-trick in the 50th minute, leaving David De Gea helpless in the Man Utd goal.

Salah became just the second Liverpool player to score a hat-trick against Man Utd in the Premier League after Dirk Kuyt first completed the feat in a 3-1 victory at Anfield in 2011.

He also became the first opposition player to score a hat-trick against Man Utd at Old Trafford since Ronaldo Nazario in a dizzying display for Real Madrid back in 2003.

Salah took his total to 15 goals in 12 games in all competitions so far this season and became the highest-scoring African player in Premier League history with 107, surpassing Didier Drogba on 104.

Carragher will also have enjoyed celebrating in the gantry in front of old rival and pal Gary Neville, who was heavily critical of Man Utd post-match, labelling the performance ‘unacceptable’.

Well, @Carra23 enjoyed that one

Neville said: “This has been a monstrous day for Manchester United. They have been obliterated. That was unacceptable. This is as bad as it gets. It’s the nature of the performance. They have capitulated.

“They’ve lost everything today – discipline, organisation. But what stands out in my mind is their organisation around the press. Finding the trigger, not getting there half-hearted.

“City can press, Liverpool can press. Manchester United are kidding themselves today that they are a pressing team. They are all over the place. The manager and his coaching staff have to take the blame for the pressing game today.

“Why would you do that? They are not a pressing team. They haven’t got it in them. If you are going to press, put in Lingard and the others who can run all day.”

Carragher also added post-match: “That will be the darkest day in his football career. Forget his time [just] at Manchester United – his [whole] career.

“He’ll never forget that. You’ll always have that sympathy for a manager. And I don’t want to get involved in a slanging match and rightly so, he should back his own corner.

“This thing of asking for managers to be sacked, I’m not comfortable saying that word sacked, [that] someone should go.

“So, I don’t feel too bad in terms of saying Manchester United need a better manager.”