THIS is the moment John Terry could manage only a muted celebration as Aston Villa scored against his beloved Chelsea.

And fans joked the Blues icon was “crying inside” as Kourtney Hause struck to give Dean Smith’s side the lead. 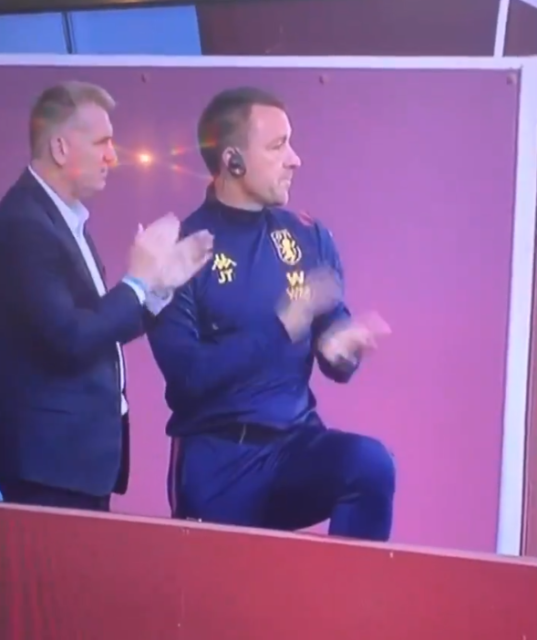 If that was over the top, then his quiet reaction to Hause’s goal yesterday was the total opposite.

Terry, Villa’s assistant head coach, pursed his lips and managed four claps before folding his arms and appearing to let out a deep breath.

Fans were quick to pick up on his reaction before Chelsea went on to win through second-half goals from Christian Pulisic and Olivier Giroud.

One commented on the clip of Terry’s celebration: “Man’s crying inside.”

Another posted: “He’s tearing up.”

Lmaoo this was 100% John Terry’s reaction to the goal pic.twitter.com/icyFTI7AE2

You can't take Chelsea out of John Terry, his expression when Villa scored says it all. #AVLCHE

John Terry with the most unenthusiastic celebration I've ever seen there.

A fellow user wrote: “You can’t blame him. Once a Blue always a Blue.”

One tweet read: “Just can’t help himself. He is torn inside.”

Another posted: “I think Terry will never celebrate against Chelsea just out of respect and love.”

Terry’s reaction could not have been more different than Smith’s.

The Villa boss punched the air in delight before seeing his side’s lead evaporate in the second half to leave them second-bottom in the table.

Terry played more than 500 games as Chelsea captain and is the club’s most successful skipper with five Premier League titles to his name.

The 39-year-old made his Blues debut aged 17 years and 10 months against Villa in the League Cup on October 28, 1998, as a substitute for Dan Petrescu.

Did you miss our previous article…
https://www.sportingexcitement.com/football/premier-league/newcastle-takeover-live-announcement-set-for-this-week-longstaff-new-deal-coutinho-transfer-latest-bruce-on-takeover