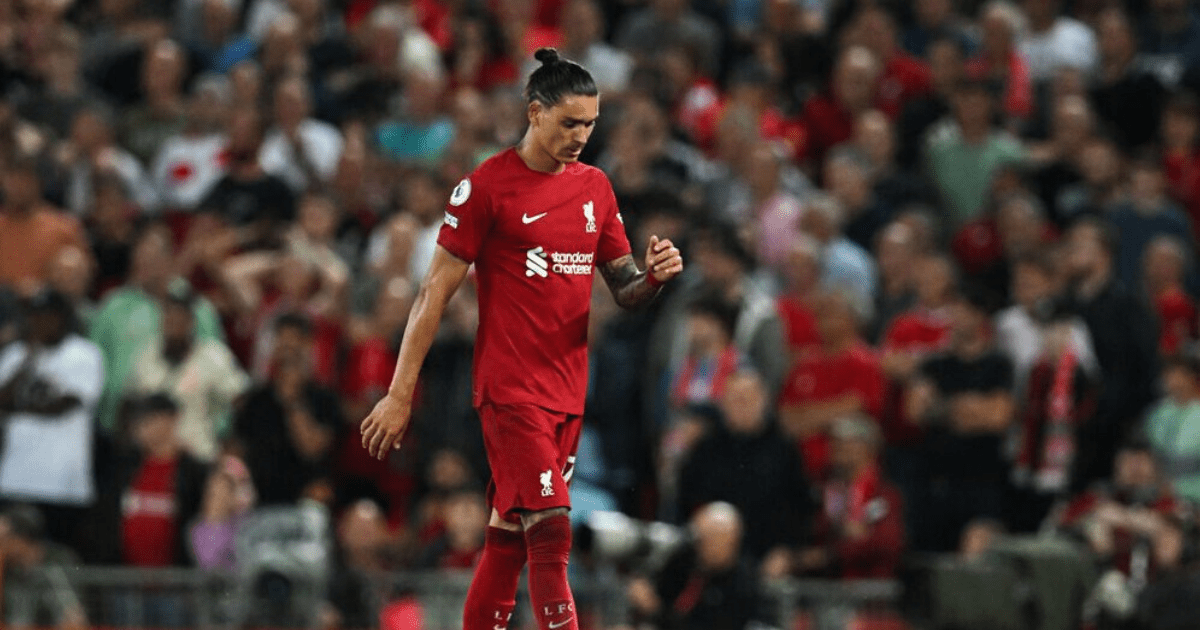 The Uruguay international, 23, reacted rashly to a small push in the back by leaning forward and hitting his opponent in the jaw, sending Andersen flying to the floor.

Nunez was sent off after headbutting Andersen

Andersen continued to frustrate the striker throughout the match

It left referee Paul Tierney with little choice but to send him off, much to the fury of Liverpool fans.

But, a new compilation of footage, which emerged on Tuesday morning, shows that the Palace centre-back continued to frustrate and ‘wind-up’ Nunez throughout the game.

That was until the striker hit a breaking point.

Andersen was hot on Nunez’s heels throughout the whole game, leaving him little time on the ball and applying pressure even when The Eagles were in possession.

Many fans took to Twitter to react, with one person writing: “Good defending. It’s standard stuff, most forwards will get this treatment every week.”

Another added: “Every team needs to watch this before playing Liverpool this season. He’s wound up so easily here, really didn’t enjoy the physicality of Andersen.”

While a third person said: “Hate to say it but it’s smart from Andersen he clearly knew Nunez has a short fuse so just kept picking away at him bit by bit until he snapped.”

Liverpool boss Jurgen Klopp was clearly frustrated with the striker after the game, even accusing him of letting the team down.

He told Sky Sports: “Darwin knows [he let his teammates down].

“I will talk to him. It was not a reaction we want to see.

“He know he will be challenged in this way, centre-halves will do that, but it is not a reaction we want.

Nunez became Liverpool’s club-record signing when he arrived in an £85million transfer from Benfica in June.

He opened his Premier League goalscoring account last week during The Reds’ clash with Fulham, which ended in a 2-2 draw.

Liverpool were 0-1 down to Crystal Palace when Nunez saw red.

Wilfried Zaha broke the deadlock 32 minutes into the game with a superb solo finish to cap off an excellent counter attack.

But, Luis Diaz salvaged a point shortly after The Reds went down to 10 men.