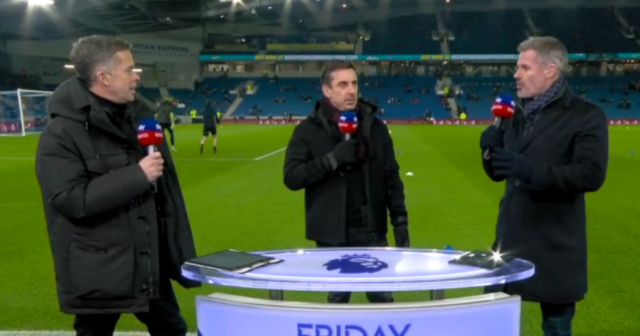 GARY NEVILLE and Jamie Carragher took aim at Boris Johnson – joking about parties ahead of Brighton’s 1-1 draw with Crystal Palace.

The pair jokingly warned both teams to treat the match as a work event despite the party-like atmosphere Friday Night Football often produces.

Gary "We get these Friday night matches, and we always seem to get a massive party."

Carra "Let's be straight this is not a party tonight, this is about work."@Carra23 | @GNev2

Neville and Carragher were of course referencing Boris’ claim that the alleged May 2020 Downing Street party was instead a work event.

Neville said on Sky Sports: “We get these Friday Night Football matches – we were at the Brentford one last time and it was absolutely fantastic. We always seem to get a massive party.”

Carragher then took over, adding: “Let’s be straight though this is not a party tonight this is about work.

“If you speak to Graham Potter, Patrick Vieira and the 22 players on the pitch they’ve got to know the difference between work and a party.

“And if they get that wrong and think they’re in party mode they’re gonna be in big big trouble.”

The pundits’ joke references that of TV duo Ant & Dec, who similarly mocked the Prime Minister after he was accused of hosting lockdown breaking parties.

During an episode of I’m A Celeb the presenters warned Boris he was the Prime Minister “for now” before cracking jokes at his expense.

“And this ‘fictional’ party definitely didn’t involve cheese and wine or a secret santa.”

And the pair followed on that ribbing by poking further fun at the government.

After the celebs hid the fact David Ginola did not receive his letter from home Ant said: “So they decided to cover it up.

“If we’ve learnt one thing in the last 24 hours it’s that you can’t get away with covering things up.”

Meanwhile, Neville – who has become increasingly politically active – has joined the Labour Party.

He said on the decision: “I have joined in the last few days the Labour Party. That is purely for myself, I want to support Labour.

“I do believe we need a progressive Labour Party, but one that not just looks after what would be the left side of the party, it has to come towards the centre.”

Advertisement. Scroll to continue reading.
In this article:Brighton, crystal palace