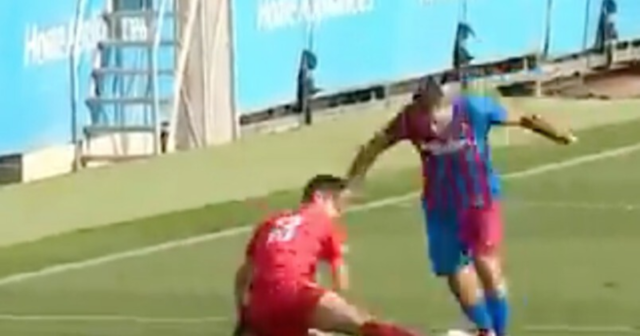 SERGIO AGUERO scored his first goal for Barcelona in a behind-closed-doors friendly against UE Cornella as he steps up his bid to return.

The Argentine joined the Catalan giants in the summer after leaving Manchester City, where he spent the last decade.

But Aguero hasn’t been able to make a first-team appearance for Barca as a calf injury ruled him out of action until now.

The 33-year-old rounded the Cornella keeper and tapped the ball into the empty net.

Aguero‘s goal, however, was unable to secure Barca the win in the friendly as they were held to a 2-2 draw.

Barca fans were far from impressed with the performance, despite the game being a friendly.

One said on Instagram: “2-2 vs Cornella, God knows what’ll happen vs Bayern in Allianz Arena…”

Another responded, saying: “bro these matches are for improving match sharpness of some players it’s not that deep.”

Aguero’s return will come as a huge boost to under-fire manager Ronald Koeman, with his side failing to find the net in four of their last six games in all competitions.

And Aguero could be in action against Valencia on Sunday evening, making his first-team debut.

One of the favourites to replace him, Roberto Martinez, has ruled himself out of the running, though.

The Belgium head coach said: “It’s not easy for me to talk about it.

“I’ve been working for five years with Belgium and I’m 100 per cent focused on this.

“We’re going to prepare for the World Cup now. There’s nothing else to say.”