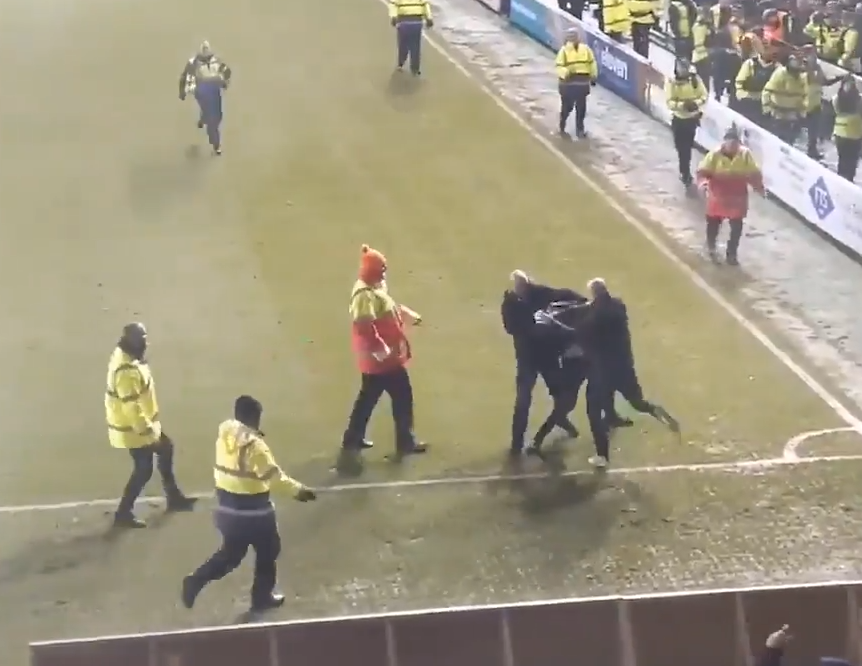 The League One clash between the two Lancashire clubs was disrupted when a home spectator ran on to goad the away followers.

A Fleetwood supporter swiftly followed suit by charging onto the pitch, sparking the melee..

Despite the best efforts of numerous stewards, the pitch invader managed to get away from them so two opposition fans took it upon themselves to stop him… by coming out of the stands and punching him repeatedly in the head.

As the three scrapped on the edge of the pitch, stewards finally managed to pull them apart.

But it then sparked more ugly scenes as a large group of fans piled down to the barriers in the south-east corner of Bloomfield Road and had to be restrained by police and stewards.

The drama unfolded after Blackpool made it 3-0 midway through the second half as Armand Gnanduillet headed home, adding to Liam Feeney and Sullay Kaikai’s goals.

Conor McAleny pulled one back ten minutes from time for the Fishermen but Joey Barton’s side slumped to defeat.

Despite going into the game level on 29 points, it leaves his team ninth while Blackpool moved up to fourth in the League One table as both clubs continue to aim for promotion come the end of the season.

Tangerines boss Simon Grayson said: “It was what you expected from a game where two teams are close together, both geographically and in the league table.

“You know theres going to be a bit of drama, quality displays and good goals and I think we were worthy winners.

“Like I said before the game, it was getting the three points that mattered. Were pleased with todays performance and results and we now move on to what is a big month for us.”

Yesterday’s fight was not the first time fans from the Fylde coast neighbours have clashed at Blackpool’s home this year.

Again, home fans sprinted over to taunt the travelling Fleetwood faithful and again, the stewards and police had to stop a mass brawl breaking out.

Outside the ground following the match, a police horse died after he was speared in the stomach by a metal pole.

Advertisement. Scroll to continue reading.
In this article:blackpool, bloomfield road