Watch Timo Werner score on his second RB Leipzig debut after £23.5 transfer from Chelsea thanks to keeper howler
Advertisement 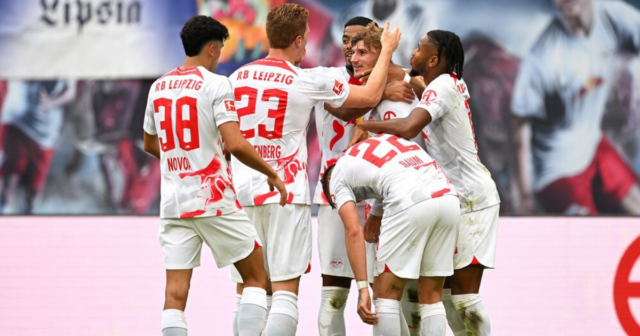 CHELLSEA flop Timo Werner netted a 25-yarder on his second RB Leipzig debut – thanks to a huge keeper error.

The Germany striker saw his underhit shot squirm in under Marvin Schwabe for the opener at home to Cologne in a 2-2 Bundesliga draw.

Leipzig twice blew leads but will he happy with Werner‘s display, although he was taken off on 67 minutes.

And the £23.5million star celebrated his low right-footed goal ecstatically – as another step on his way to hitting a ton for Leipzig.

Manchester United reportedly tried to hijack his return to RB at the 11th hour.

But instead he returned to the club where he was so prolific from 2016-20 – ahead of two mixed years with Chelsea.

Werner said: “We want to achieve a lot and of course, I want to become the first Leipzig player to reach the 100-goal mark.”

But his goal was mocked by some fans on social media.

One said: “What in the absolute farmers league is going on here?”.

And a similar view was: “Look at the keeping.”

Some observers, though, suggested the strike showed Werner was more unfortunate in English football rather than unsuited to it.

One supporter claimed: “Luck wouldn’t be on his side like that in the Prem.”

Maybe Werner just feels more comfortable as a kingpin at Leipzig than he ever did as a squad-player Stamford Bridge, especially when Thomas Tuchel made his a bit-part player.

And apart from a brilliant rapport with RB supporters he’s also buoyed by the belief shown in him by RB.

Vivell said: “He has a lot of experience on the international stage and knows RB Leipzig very well – he’ll take on a leading role here.”