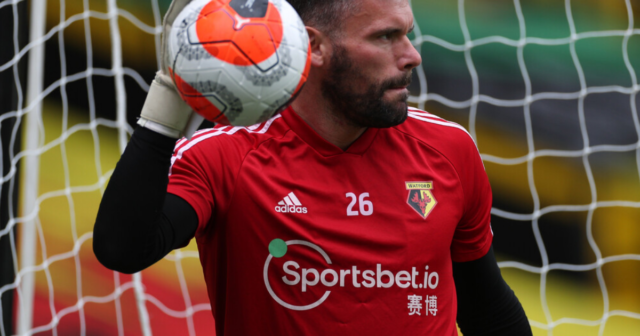 BEN FOSTER is under fire after gifting Watford tickets to a Liverpool fan who was booted out of Vicarage Road.

UFC star Paddy Pimblett branded the Hornets a ‘s*** club’ in an Instagram video after he was ejected for celebrating the Reds’ 5-0 win on Saturday.

Pimblett said: “Ben Foster gave me the tickets, I didn’t get to pick where I sat.

“Watford, Ben Foster, I love you mate. But I hope Watford go down, youse are horrible, horrible.”

“The result and performance was shameful, and this s*** with Pimblett and Foster is just another level. Unbelievable.”

Foster provoked further anger from his own fans for appearing to back Mo Salah to score against him.

The former England keeper, 38, picked Salah as his ‘captain’ in one of his teams in the Fantasy Premier League Game.

And that earned Foster double points as Salah bagged a wondergoal and an assist in the drubbing.

Foster also left himself on his fantasy team’s bench and picked Manchester City’s Ederson in goal, although the Brazilian did not play.

Foster and Salah chatted on the pitch at full-time and one fan Tweeted: “Ben Foster asking for Salah’s shirt after a 5-0 whipping. Gotta respect the grind.”

Did you miss our previous article…
https://www.sportingexcitement.com/football/premier-league/patrick-vieira-turned-up-at-arsenal-looking-nothing-like-a-footballer-but-soon-showed-he-was-a-physical-monster