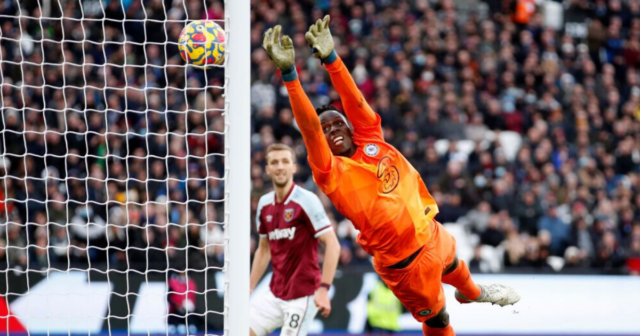 The left-back, on as a first-half sub, netted only his second goal in five years as a West Ham player with what looked like a botched attempt at a cross – as Blues keeper Edouard Mendy could only help the effort inside his near post.

Thomas Tuchel’s European champions dominated for long spells but David Moyes’ side levelled through a Manuel Lanzini penalty and a Jarrod Bowen strike, after Thiago Silva and Mason Mount had both given the Blues a first-half lead.

Chelsea’s leadership of the table is now under serious threat with Liverpool and Manchester City both playing later today.

But the Hammers have now beaten Tottenham, Liverpool and Chelsea at the London Stadium this season – and sit in the final Champions League places, despite an insipid first-half display.

Chelsea, in their Borussia Dortmund clobber, started brightly without creating anything clear cut.

West Ham were strangely flat, with and without the ball, and there was an element of 12.30pm kick-off syndrome about what is usually a feisty derby.

Tomas Soucek glanced a header wide from a Michail Antonio cross but on 28 minutes, Chelsea were in front.

Mount swung in a corner from the right and Thiago rose above a leaden-footed Antonio and Issa Diop to head home.

It was passive defending, which summed up West Ham’s start, but it roused Moyes’ team.

Yet Thiago was soon called into action at the opposite end, the Brazilian hacking off the line after Vladimir Coufal had lashed in a shot which beat Mendy.

And five minutes before the break, the Hammers were level thanks to a second shocker in as many weekends from Chelsea skipper Jorginho – who’d managed a podium finish in the Ballon d’Or last Monday.

Jorginho had gifted Manchester United an opener at Stamford Bridge last Sunday and here his under-cooked back-pass let in Bowen, who went down in a wrestling match with Mendy and ref Andre Marriner pointed to the spot.

Manuel Lanzini thumped the penalty into the roof of the net.

But the sense of relief didn’t last long for the hosts – and they were caught legs-akimbo as Chelsea regained the lead.

Ruben Loftus-Cheek swept out a pass to Hakim Ziyech and the winger’s excellent cross picked out an unmarked Mount, who beat Lukasz Fabianski at his near post with a cushioned volley. 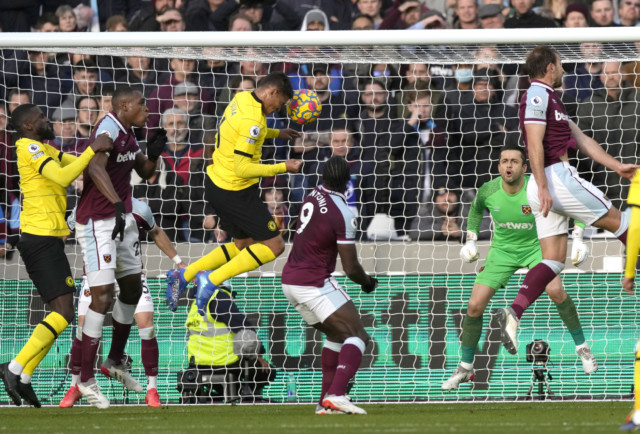 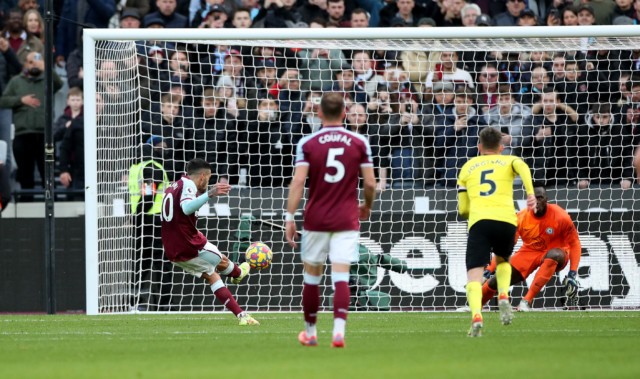 Manuel Lanzini showed confidence from 12 yards to dispatch his penalty 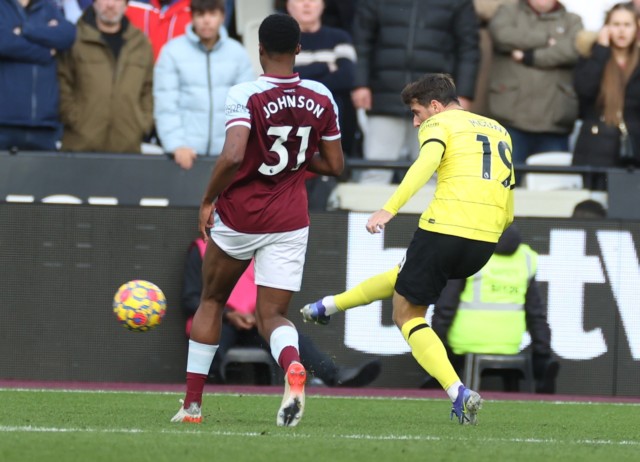 Left-back Ben Johnson, who allowed Mount to escape, immediately limped off through injury – but despite that element of misfortune for West Ham, Chelsea were thoroughly deserving of their half-time lead.

Chelsea were also forced into a break at half-time – although they could call on £97.5million Romelu Lukaku to replace the injured Kai Havertz.

Yet West Ham were level again within ten minutes, Chelsea defending hesitantly and Coufal feeding Bowen, who rammed home a shot which nutmegged Andreas Christensen on its way past Mendy.

Kurt Zouma pulled up with a hamstring injury cutting short his reunion with his former club and Moyes sent on Pablo Fornals in a positive move.

Antonio won a shoulder-barge with Hudson-Odoi and flashed a centre across goal, Bowen not quite able to apply the final touch.

Did he mean it? It is highly doubtful – but Moyes and the Hammers will not care. 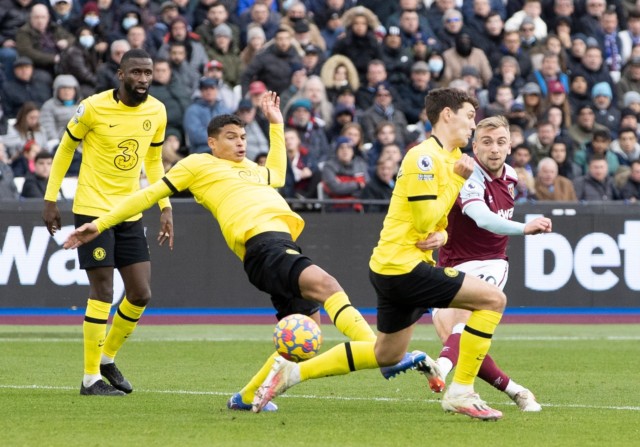 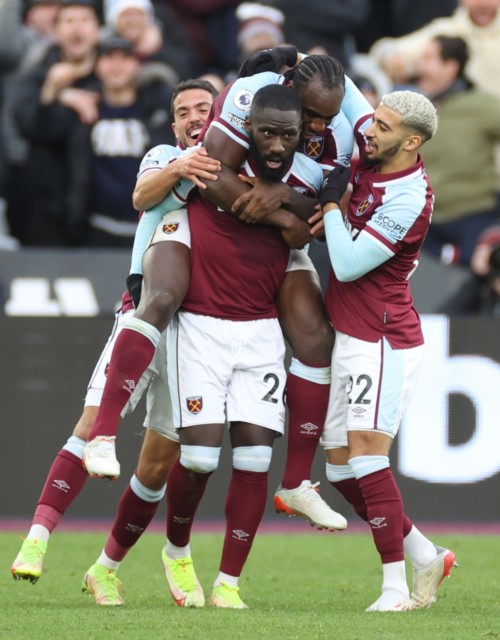 Masuaku looked almost embarrassed as his team-mates celebrated the winner 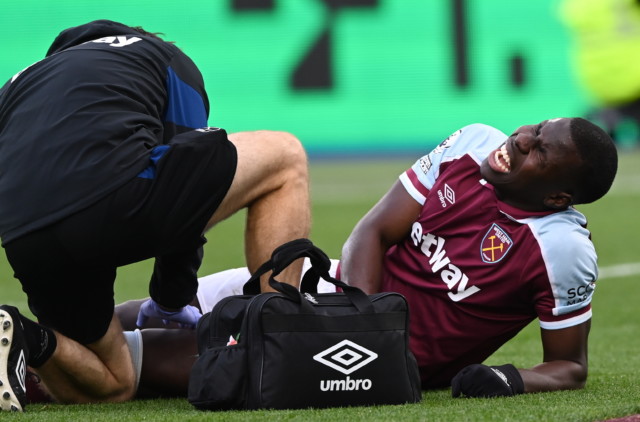 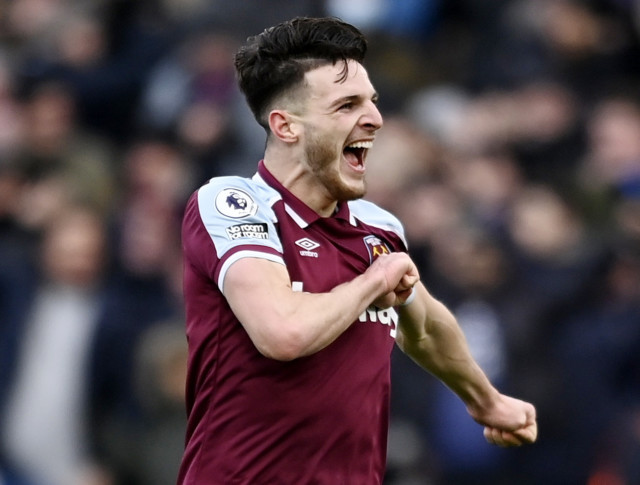