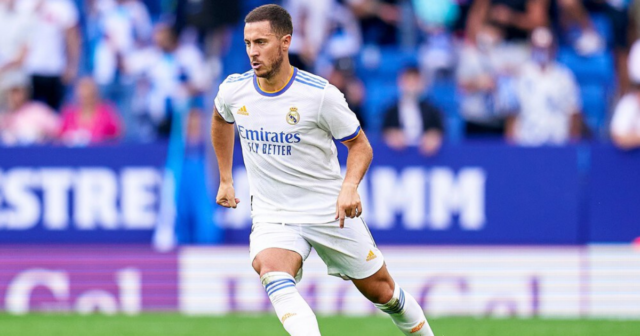 EDEN HAZARD is reportedly looking for a move back to the Premier League with West Ham and Everton leading the race to secure his signature.

The 30-year-old has been plagued with injury and fitness issues since arriving at Real Madrid from Chelsea in the summer of 2019.

Hazard has failed to make any sort of impact in Madrid

He has played 54 times across two and a half seasons, scoring just five goals for the Spanish giants.

As a result, Madrid, who signed him for an initial £88million rising to a potential £150m, are happy for him to leave for as little as £25.5m or £21m if a club can convince him to join on loan in January with a permanent option at the end of the campaign.

According to the Sunday Mirror, this is because Hazard earns a huge £416,000 per week.

This works out to an annual salary of £21.6m, a sum Madrid are desperate to get off their books.

However, Hazard is not keen to leave mid-season and would prefer to wait until the summer.

Real boss Carlo Ancelotti is thought to have given his blessing for Hazard – who has not scored in 11 appearances this season – to leave the Bernabeu.

Speaking about Hazard’s future back in October, Ancelotti said: “Never in my career as a coach have I forced a player to stay when they want to leave.

“Hazard is ready, but his problem right now is that he has a coach who prefers other players, which can happen in a squad like this one.”

West Ham and Everton are thought to be the two Premier League clubs showing the most interest in bringing the Belgian back to England.

And if they can return him to full fitness then it could prove a masterstroke given his superb record in the Prem.

Hazard scored 111 goals in 352 appearances for Chelsea during a seven-year spell with the club.

Along with the Hammers and Toffees, Newcastle have also been linked with a move for the Madrid reject.

Outside of England, reports have suggested Hazard has ‘promised’ to sign for Turkish giants Fenerbahce.

He has also been linked with a move back to Belgium to play for minnows KVC Westerlo.