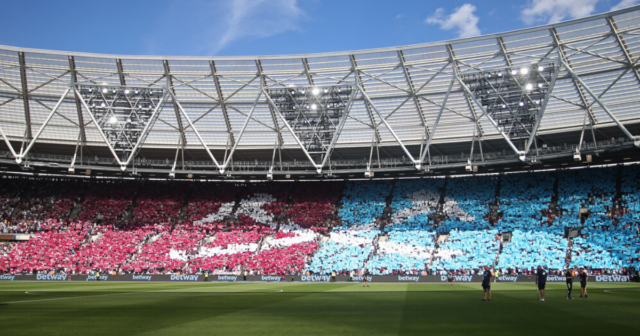 WEST HAM suffered a 2-0 defeat to Manchester City on Sunday, but the scoreline was not the only issue that got fans talking.

The Hammers returned to Premier League action at the London Stadium last week.

Fans returned to the London Stadium on Sunday, but some were left disappointed

The @LondonStadium have installed a barrier as part of the new West stand meaning home and away cannot see each other pic.twitter.com/t5aJ0Ufc2e

David Moyes and his squad endured a disappointing start to the season as Erling Haaland scored a brace to gift Man City all three points on the opening day.

But, despite the defeat, fans appeared more upset about a new addition to the stadium.

During the summer break, West Ham built a WALL as part of the new-look west stand to separate the home and away fans.

The barrier means home and away fans sitting close to opposition supporters cannot actually see them.

The wall has been covered in club flags, but many supporters have questioned the point of it.

One tweeted: “It’s nonsensical. You could literally fit 3 double decker buses between each set of fans.

“There’s no way of them getting to each other – compared to other grounds this is luxury in terms of segregation. It also doesn’t prevent missiles being thrown, which can be thrown over it…”

Another added: “In what world did someone think this was a good idea?”

A third wrote: “Another terrible decision from the club.”

While another slammed the club’s owners in a tweet which read: “Sucking every single bit of atmosphere that we have yet again. Well done @davidgold and co.”

West Ham chiefs have not yet offered a reason for building the wall, however, some supporters believe it was implemented to prevent crowd troubles.

The Hammers were handed a hefty fine by Uefa last season after home and away fans clashed during a Europa League game against Rapid Vienna at the London Stadium.

Local police were forced to intervene during the match after both sets of fans began throwing objects at each other.

Did you miss our previous article…
https://www.sportingexcitement.com/football/premier-league/arsenal-and-liverpool-line-up-yeremy-pino-transfer-with-villarreal-ready-to-sell-winger-19-for-right-price/