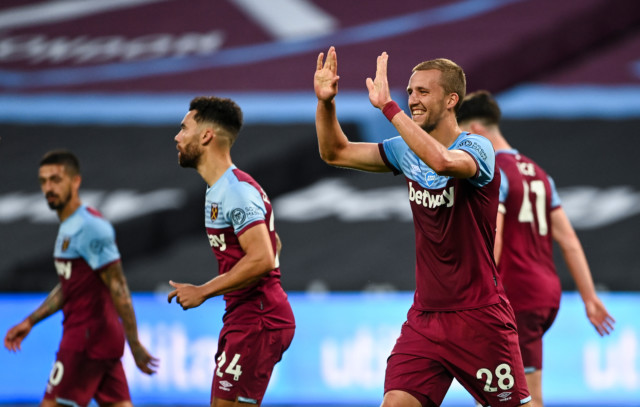 WEST HAM took a big step towards securing Tomas Soucek permanently with their win over Chelsea.

The Czech midfielder is on loan with the Irons until the end of the season.

But a clause in the deal states impressive Soucek will automatically become West Ham’s man full time unless they are relegated.

And Wednesday’s thrilling 3-2 victory over Chelsea has given them a three-point  cushion above the  drop zone with six games to play.

If they survive, Soucek will sign a four-year contract, with West Ham paying  a transfer fee of around £15million.

Soucek’s goal against Chelsea at London Stadium  ended his misery in front of goal.

He earlier had an effort ruled out by a controversial VAR decision that left boss David Moyes “spewing”.

Wednesday’s win was West Ham’s  first since the season resumed.

Soucek said: “I’m very happy. I was in the changing room and everyone is very happy.

“We have had to wait a long time for a win and, during the season suspension, it was a tough, long time.

“We won against a very good team and we are very happy. We now need to get more points in our coming games.”

He added: “I was a bit angry because in the last game I scored an own goal after a handball and then, against Chelsea, I scored and I think Michail didn’t touch the ball.

“But then luck was on our side and I was able to  score my first goal for West Ham ten minutes later.”  Hammers chiefs have liked  Soucek’s physicality and  how quickly he has adapted to English football following his move  from Slavia Prague in January.

Soucek said: “I’m excited for the next game. We need points and now we have two recovery days before we go to Newcastle, which we look forward to.

“For us, it is a better  situation now.”

Midfielder Declan Rice was made captain in the absence of injured Mark Noble at West Ham’s empty ground.

Rice said: “The only thing I could say is I wish the fans were here to witness that.

“We know it hasn’t been good enough as a team recently but this  showed the fans we do care, we do work hard and we have got quality.

“Everything  emphasised what we are all about — grit, desire, hard work.

“And there wasn’t one of the lads who didn’t give everything.