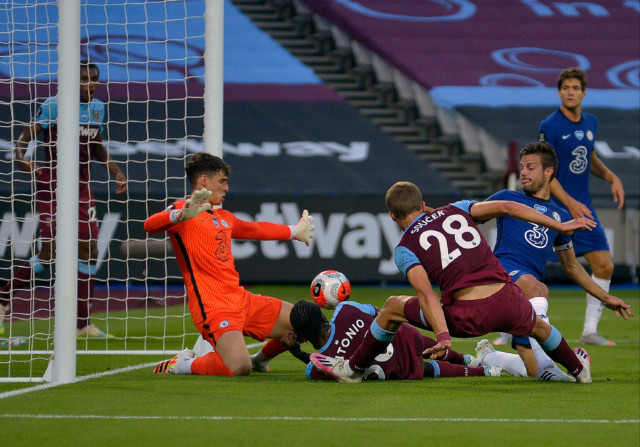 MICHAIL ANTONIO summed up — much more politely than most — how everyone at West Ham feels about VAR following our win over Chelsea.

Too right things have not gone our way. We are now the joint-worst affected­ Premier League side this season, alongside Sheffield United, in terms of VAR decisions.

VAR was brought in to reduce the number of innocent mistakes a referee makes during a game.

I understand that completely. With so much at stake, the pressure on the refs to get 100 per cent of decisions right is overwhelming.

And it’s not only the money that matters — with £2.4million per place (top club earning £159m and the bottom club £94.2m), the cost of relegation and massive financial benefits of the European places.

It’s also the fact the multi-angled cameras used by the broadcasters meant those watching the match at home knew the referee’s decision was wrong long before the final whistle was blown at the match.

But in this strangest of football seasons, it is clear VAR has not corrected those mistakes.

It has made its own.

Because the ref on the pitch has simply been replaced by one in a box — and not the penalty box. One in a box in a remote location in Stockley Park. A place that claims to have discovered a bronze age burial ground.

Maybe in the next century they will find the buried bones of past Premier League clubs, cast adrift by some ludicrous decisions that sent them into the abyss.

Otherwise known as the Championship.

Not only has it made mistakes, VAR is also testing the crowd’s patience.

Admittedly, the crowd on Wednesday night at London Stadium in these strangest of times, was just 20 directors, the extended subs on the bench and about 100 press. But we waited almost four minutes for VAR to come to a decision about Tomas Soucek’s goal.

It’s an unusual atmosphere being in an empty stadium watching a match but one of the few advantages is you can hear Gary Neville’s TV commentary from inside the stadium while you are in your seat.

At one point during those four minutes, I heard him say to the millions watching at home that if it takes this long for VAR to make a decision, then the goal should stand.

Common sense if I ever heard it. But as we are finding out, common sense is not a factor of VAR. The goal was ruled offside because Antonio — lying on his back, facing away from the goal — was at the same time deemed to be interfering with play.

Rules are rules, even the ludicrous ones.

Rules like your eyelashes being offside ruling out goals.

VAR was brought in to make 100 per cent of the ref’s decisions right but that’s not happened.

After a lung-busting performance in West Ham's 'massive' win against Chelsea, @Michailantonio speaks to Sky Sports about the importance of the result and his 'dislike' for VAR!

As we found out at Spurs when their handball (incidentally watched for a matter of seconds by VAR and not the four minutes we endured at London Stadium for the Soucek goal) was deemed unacceptable.

VAR was brought in to rule out inconsistences but still the inconsistences prevail. The whole point of VAR was to eliminate the referee’s individual mistake.

In reality, the buck has just passed to another referee who is not even in the stadium.

It is incredibly frustrating.

After watching us have a goal taken away, then giving away a soft penalty to go 1-0 down, most clubs would give up.

But not us. We just kept fighting, we kept going and we got the victory.

But the truth is VAR has been against us all season.

Even at an early Premier League meeting this year, when they reviewed the VAR decisions and admitted they got West Ham’s wrong, there was no apology.

We did what we did on Wednesday night.

We buck up, knuckle down and keep fighting.

But something has to give at some point.

It is time to show VAR the red card. 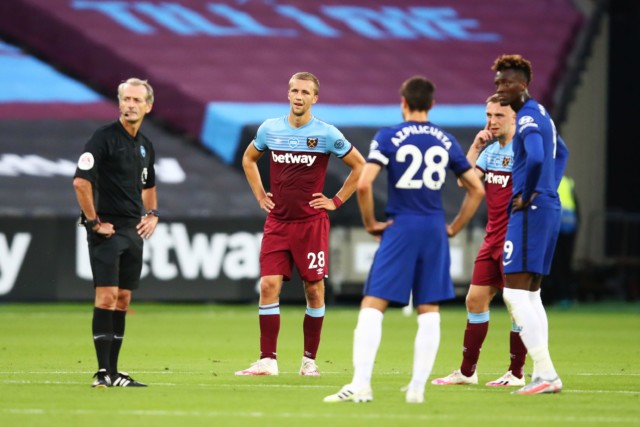 West Ham have been on the receiving end of their fair share of tough VAR decisions alongside European-chasing Sheffield United
Advertisement. Scroll to continue reading.
In this article:chelsea, london stadium, premier league, sheffield united