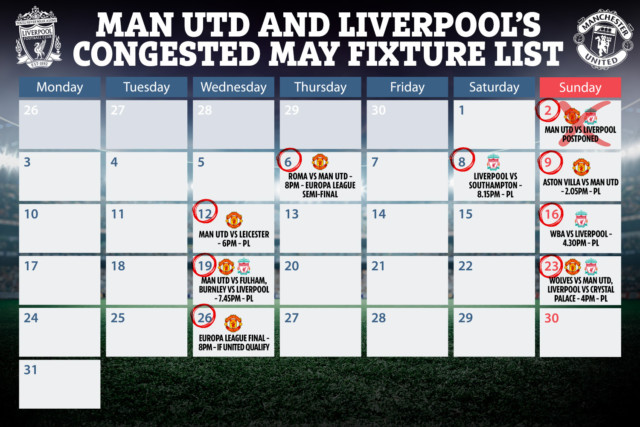 MANCHESTER UNITED vs Liverpool is one of THE biggest matches of any Premier League season.

And the fans made sure this year’s fixture became one that will send shockwaves around English football. 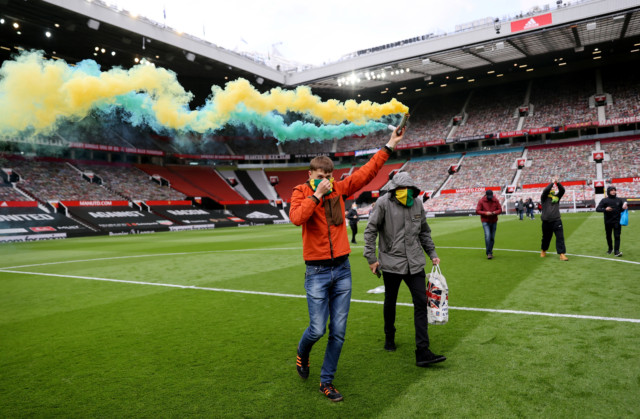 Thousands of Manchester United supporters marched on their beloved Theatre of Dreams in protest at the club’s owning family the Glazers, who they want to sell the club.

The Glazers were instrumental in attempting to set up the proposed European Super League with a raft of other big European clubs, which has fallen on its face after fan rage.

The delayed fixture could disrupt the tail-end of United’s season, with the Red Devils fighting to win the Europa League as well as consolidate second place in the Prem.

When will Manchester United vs Liverpool take place?

The two clubs, as well as the Premier League, are in talks to find a date and time for the fixture.

One possibility is to have it on the weekend of the Champions League final, May 29-30, which will be just days after the Europa League final on May 26.

However this is unlikely as it would mean the game being played after the season is finished, putting Man Utd and Liverpool potentially at an advantage over the 18 other clubs.

According to SunSport’s Martin Lipton, the most likely course of action will be that Liverpool’s trip to West Brom, scheduled for May 16, will now be brought forward by four days to May 12, when United are due to be playing Leicester.

That will allow the rescheduled clash of the north west giants to be played at Old Trafford on Sunday May 16.

When can the Premier League fixture happen?

It’s complicated, but basically there may need to be a significant reshuffle if the game is not played today – Monday, May 3.

Here is how both teams’ schedules look after Old Trafford clash postponed:

Will the rescheduled Man Utd vs Liverpool match have fans?

Man Utd would be legally allowed to host Liverpool in front of a 25 per cent capacity if the game is moved to a date on or later than May 17.

However, if this does happen it is unlikely that Liverpool or the other Premier League clubs would agree to the game being held with fans.

All teams will play two games after May 17 – one home and one away – so all clubs can host fans once.

The other clubs are therefore unlikely to agree to anything that could bring the integrity of the competition into question as this key stage.

What will United’s punishment be for the fixture being postponed?

Ole Gunnar Solskjaer’s side could face a hefty fine or even a points deduction if they are found to be culpable of the postponement.

The FA are investigating the chaotic scenes to determine what punishment they will hand out.

A points deduction is an option – although it’s believed to be highly unlikely such a severe sanction would be used.

What TV channel will the game be on and can I stream it?

Whatever happens to the match, Sky Sports Main Event and Sky Sports Premier League will broadcast the Manchester United vs Liverpool clash.

Then Now TV will be streaming the match.