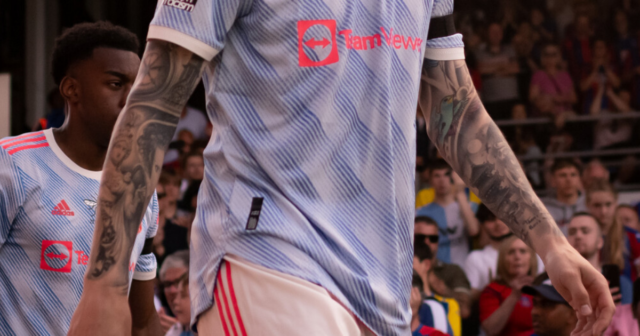 MANCHESTER UNITED and Man City are playing in their final matches of a thrilling Premier League season today.

And you may notice a bee logo on both the Manchester clubs shirts during their matches, against Crystal Palace and Aston Villa.

Man Utd are wearing the bee on their shirt too

City are going for the Premier League title, while United are hoping to finish the season on a high.

United’s new manager Erik ten Hag is in attendance at Selhurst Park to watch the club for the first time.

Why are Man Utd and Man City wearing a bee logo on their shirts?

Today marks five years to the day since the bombing of Manchester Arena at an Ariana Grande concert.

On that day, 22 people, including children lost their lives.

The worker bee has been a symbol of Manchester for 150 years and is being placed next to the club’s badge to pay tribute to the victims.

Why is the bee a symbol for Manchester?

The worker bee is an emblem for Manchester, symbolising the city’s hard-working past.

It was a hive of activity during the Industrial Revolution and workers were soon dubbed “busy bees”.

Seven bees are included in the crest of the city’s arms.

The insects are also dotted around Manchester’s streets, decorating the clock face of the Palace Hotel and the flooring at Manchester Town Hall.