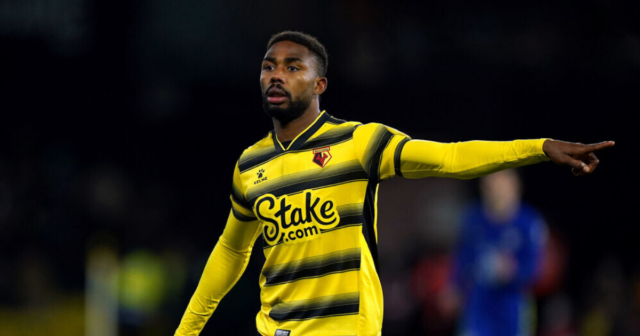 EMMANUEL DENNIS’ agent Drew Uyi has declared the Watford striker could have been plying his trade at Arsenal or Manchester United.

The 24-year-old linked up with the Hornets in the summer from Club Brugge in a cut-price deal as he neared the end of his contract.

And he has been an instant hit since making the move to Vicarage Road having chipped in with six goals and five assists in 14 Premier League games.

The Nigeria international has long been linked with a move to England, with the Red Devils tracking the player as early as 2017.

Meanwhile the Gunners were eyeing up a swoop for the forward in 2020 as a possible replacement for Pierre-Emerick Aubameyang had the 32-year-old not penned a new contract.

Uyi has confirmed that the two clubs were in for Dennis, though both teams refused to meet Club Brugge’s £25million asking price.

Speaking to The Football Show via the Daily Post, he said: “Arsenal were interested (in signing Dennis) in the past.

“Manchester United were also interested, but Club Brugge wanted a ridiculous fee for him.

“In the end he joined Watford for £3.4m because his contract was running out. He was frustrated at Club Brugge.

“He was not happy because no young man would be if he were stopped from such opportunities.”

Watford icon Troy Deenay has backed Deeney to be a huge success at the club following his explosive start to his Premier League career.

The Birmingham striker told the Hornets’ website: “Legends before me: Luther [Blissett], John Barnes, Tommy Mooney, Tommy Smith – everyone has a legacy and they do so much up to that point.

“I’ve done my point and it’s up to the guys in the squad now to take it further than I ever could.

“The legends of this club all move forward and I’m just a name. There is an opportunity for someone else.

“I think [Emmanuel] Dennis is playing great and if he sticks around for five years he could go and do that as well.”