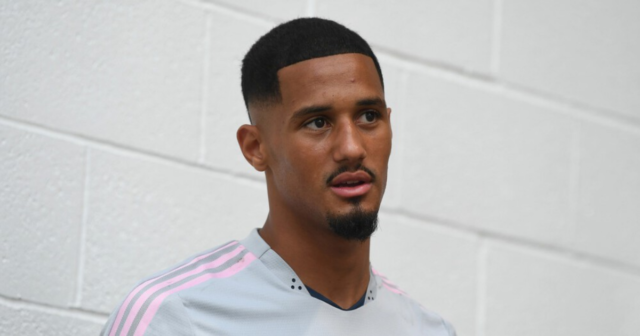 WILLIAM SALIBA will demand to leave Arsenal if Mikel Arteta does not guarantee him a place in the starting line-up, according to reports.

The 21-year-old French centre-back has spent the past three seasons on loan since being signed from Saint-Etienne for £27million in 2019.

Arteta is going to assess Saliba during Arsenal’s pre-season

He struck a deal with the Gunners three years ago but spent the 2019/20 campaign back on loan at Saint-Etienne.

Since then, he has enjoyed spells at Nice and, most notably, Marseille last season.

Saliba impressed while playing for the French side, making it into the Ligue 1 Team of the Year and being named the Young Player of the Year.

Now he has returned to Arsenal’s training ground and is keen to make an impression at the Emirates.

However, according to The Independent, he wants away from North London if Arteta cannot promise him a regular place in the team.

Saliba, who has five international caps, is keen to make France’s squad for the World Cup at the end of this year.

But if he continues to sit behind Gabriel and Ben White in Arsenal’s pecking order then that may not happen for him.

It is claimed that he will wait until the start of the season before assessing his options, with Arteta due to analyse his progress in the coming weeks.

But, depending upon his position in the squad, he will seek a way out of the club in the last fortnight of the window.

Atletico Madrid and Marseille are thought to be interested in signing the young defender on a permanent deal.

He said: “Keeping hold of William is a three-way matter for Arsenal, who own him, as well as for the player himself and for Marseille.

“We need to take a look at our possibilities. He is very happy here with us, and we are very satisfied with his performances.

“William is one of the best young defenders I have ever seen in my career.

“In the end it will all depend on the three parties. It is a real question of what he is worth on the transfer market.

“But we have an extraordinary relationship with Arsenal.”