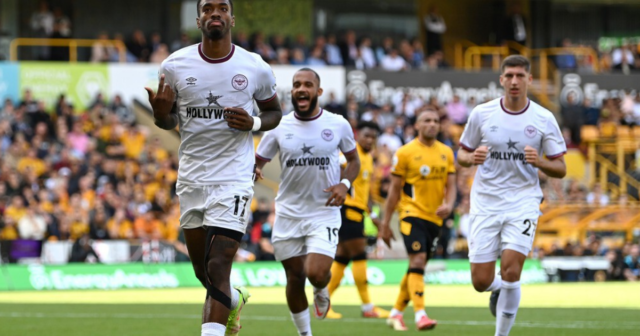 The Brentford striker scored one and made another in an all-dominating performance to hand Thomas Frank’s Bees their second win of the season.

It was also a second goal of the campaign for Toney, 25 – but this display felt different to the rest.

After a record-breaking 31 goals in the Championship, a lot was expected of the man who was playing for Peterborough in League One just over a year ago.

By his own high standards, his first four games in the Prem have been quiet – even after grabbing his first away to Aston Villa last month.

But against Wolves, we finally saw it: the real Ivan Toney.

The physicality. The ingenuity. The pace. And the thing that had been missing; the ruthlessness.

Not anymore. His 28th minute penalty followed by an assist for Bryan Mbeumo proved that, and he was unlucky not to have a first half hat-trick after two disallowed goals. 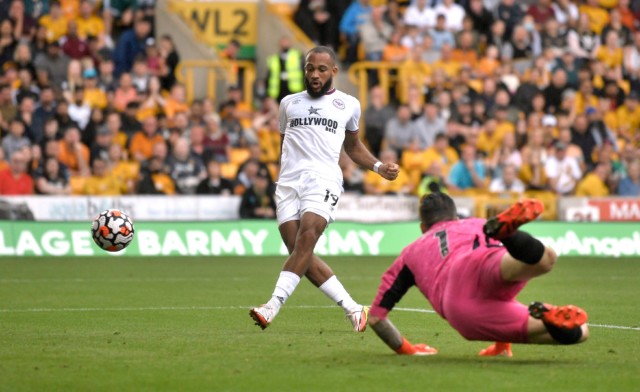 And Brentford’s control of the contest even continued after Shandon Baptiste received two quick-fire yellow cards after an hour.

As for Wolves, it was woeful at times. For a team who played so well without the points to show for it so far, they fully got what they deserved here.

New boss Lage is still waiting for his first home win in charge – and they have now lost four on the bounce at home for the first time in five years.

Both sides were unchanged and Brentford emerged the stronger looking determined to avenge their injury-time loss to Brighton last week.

They had the ball in the net after nine minutes as Kristoffer Ajer played in Bryan Mbeumo down the right. He looked a mile offside but the flag stayed down.

Mbeumo found Toney in the middle whose first-time finish found the far corner before the flag finally went up, and rightly so. 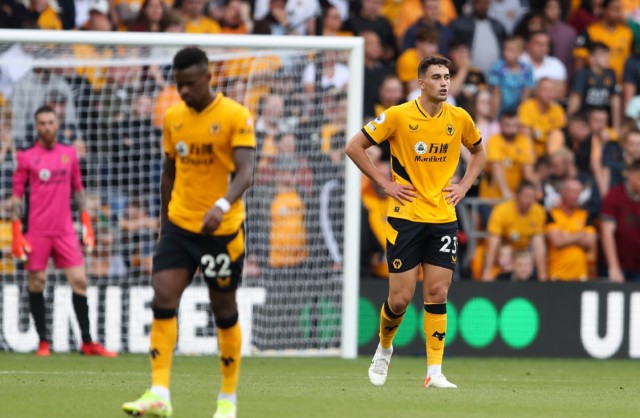 Wolves suffered a dismal first half in front of their supporters

Wolves were struggling to get a grip of the game – and their frustration proved to be their undoing in the 26th minute.

A warning had been made by referee Darren England at a previous corner following some grappling. Fernando Marcal ignored this and decided to rugby tackle Toney at the next.

Wolves were up in arms, and keeper Jose Sa was booked for complaining and some penalty spot tampering. Toney remained calm and slotted home.

The hosts were flustered, and conceded again almost immediately. Vitaly Janelt was played through by Sergi Canos only to be stopped by an onrushing Sa.

Canos returned to head goalwards. Mbeumo’s flick was then backheeled into an empty net by Toney.

Confusion arose as it was initially disallowed for offside, despite two Wolves players being on the line. VAR soon confirmed it was for handball from Toney. Again, the right call.

Skipper Conor Coady screamed for calm. He got the opposite. 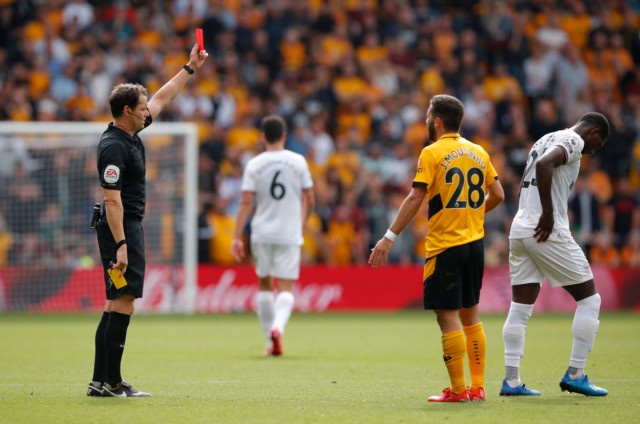 Moments after Adama Traore’s deflected effort smacked the bar, Brentford went from back to front to double their lead in the 34th minute.

David Raya found Toney on the left, who outmuscled Max Kilman and drove towards goal before picking out an unmarked Mbeumo to tap into an empty net.

After having just nine shots in target in their previous four games, Brentford scored two from three in just one half.

And they should have made it 3-0 seconds after the break as Wolves’ defensive lapses continued – Mbeumo skewing wide after Ruben Neves’ fumble on the edge of his own box.

Wolves pushed for a way into the game, frantically and desperately as opposed to having any real plan.

Baptiste’s two unnecessary yellows in 60th and 65th minute helped them in that respect, while half time substitute Hwang Hee-Chan provided some real energy.

The South Korean was denied by a timely challenge from Ajer in the six-yard box before Raul Jimenez somehow headed wide in the dying moments.

Tensions came close to boiling over towards the end as both benches clashed over time-wasting antics, with Frank being booked for his involvement. 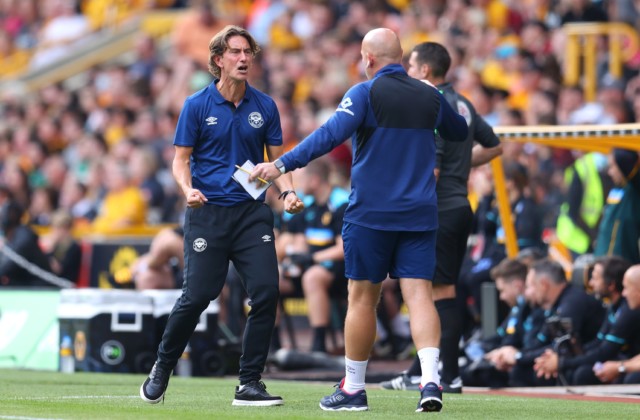 Frank was pumped to clinch a win a Molineux

In between several Bees players going down with “cramp” in the closing stages, Mbeumo found time to hit the bar on the counter that would have really rubbed it in.

But for all the late drama, this was as routine an away win as Brentford will get this season.