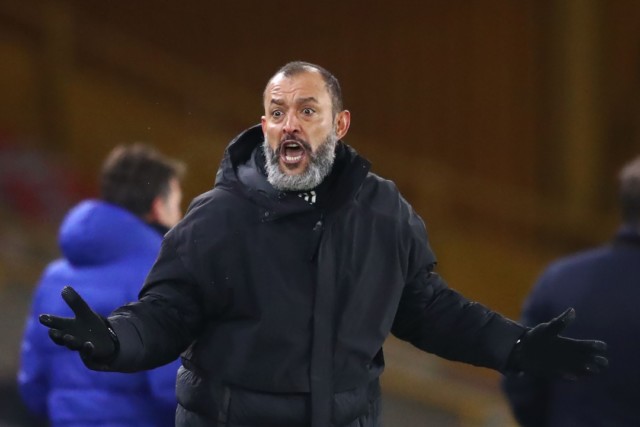 NUNO ESPIRITO SANTO has been hit with a charge of improper conduct by the FA for scathing comments he made about referee Lee Mason on December 21.

Mason actually awarded Wolves a late penalty during their 2-1 defeat by Burnley at Turf Moor but that didn’t prevent Nuno from launching into a tirade against the official after the final whistle.

“I don’t like it, but I must say it, the referee does not have the quality to whistle a game in the Premier League,” Nuno told Sky Sports.

“This is a problem that we knew. We already had Lee Mason before.

“This is not about the crucial mistakes or the major decisions, it is about the way he handles the game.

“The players get nervous. He whistles by the voices when some players shout.

“I told him I hope that he doesn’t whistle a game involving us again because all the games we have with Lee Mason it is always the same.”

He then went on to tell BBC Sport: “Football is a physical game, a game of contact and referees taking the decisions and being fair, but the referee is not good enough to whistle, Lee Mason is not good enough.

“It is about how he handles the players, both teams are always arguing the decision. He must improve because the game requires good refereeing and good handling of the game so the players can perform.

“It is his job, he has to improve, he has to get better. When we saw the nomination, we did not understand it because he is a point of distraction. He worsens the flow of the game.”

Nuno refused to back down and apologise for his comments in a press conference 48 hours later.

He has until January 5 to respond to the FA’s charge.