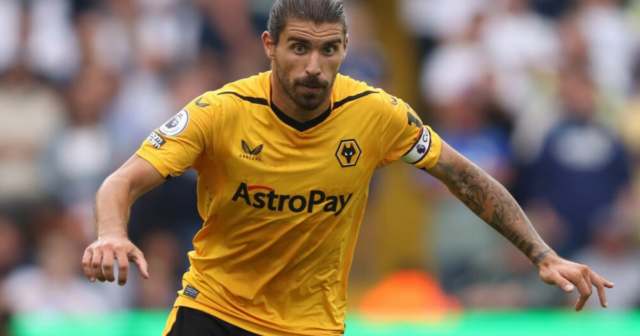 WOLVES are working on a megabucks deal to keep Ruben Neves after warding off the big boys.

The Portugal star has two years left on his contract but boss Bruno Lage is eager to keep him and is pushing for the club to offer him £100,000 a week.

The midfielder, 25, currently on around £60,000 a week, was expected to leave this summer but Manchester United and Arsenal were put off by Wolves’ £80million price tag.

Now the former Porto midfielder, who cost £15m in 2017, has been made captain following the departure of Conor Coady to Everton.

And Lage sees Neves as a huge part of Wolves’ future.

The Portuguese boss said: “We are working on a new deal for Ruben.

“At the last game, the fans were singing ‘keep Ruben’ and we’re doing everything on that front to keep him.

“Ruben has started the season with us and we have a great relationship.

“It’s easy to work with him, he understands a lot of things – not just about him but the team – he’s a great professional and he wants to keep learning and improving.

“And during last season, every challenge he was given he worked to meet it and I am so happy he’s staying with us.”

Lage is promising fans up to FOUR more permanent signings before the transfer window shuts.

He added: “I’m trying to convince three or four players to come to Wolves.

“I want to push to convince the right players to come to help us.”

Asked if they would be loans, Lage added: “No – we have got expectations that all these things can happen.

“Be patient with me and trust me because I am putting a lot of pressure on the people that we can bring in the right players to make us a better squad.

“I said I wanted Guedes on June 7 last year so it took me 14 months, so believe in me.”