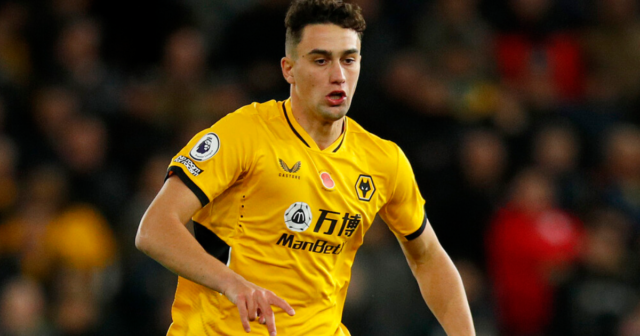 MAX KILMAN is reportedly in line for a shock call-up to Gareth Southgate’s England side after a string of impressive performances for Wolves this season.

The 24-year-old versatile defender’s robust displays have helped Wolves jump to sixth in the Premier League.

Kilman’s also built a solid partnership with team-mate Conor Coady, who’s already earned his stripes with the Three Lions, which has seen Wolves achieve the Prem’s fourth-best defensive record at the stage of the campaign.

Kilman’s contribution at the Molineux under Bruno Lage hasn’t gone unnoticed by Three Lions boss Gareth Southgate, according to The Athletic.

They report that Kilman could be used to bolster Southgate’s injury-ravaged back four going into next winter’s World Cup in Qatar.

It’s reportedly been discussed that Kilman may be placed at the heart of the Three Lions’ defence, or he could be used at right-back which is where he thrives for Wolves.

But Kilman’s also got a nifty left-foot so he can play at left-back where the Three Lions could do with some extra oomph, the Athletic claim.

At the moment, Southgate’s only options on the left flank of the Three Lions defence is the injury-prone Luke Shaw and Ben Chilwell.

And both stars are currently recovering from injuries picked up with their respective clubs.

Manchester United ace Shaw has been on the sidelines since picking up a concussion in the Reds Devils’ 4-1 defeat to Watford in what turned out to be ex-boss Ole Gunnar Solskjaer’s last game in charge.

While Chelsea star Chilwell’s been ruled out of action for at least six weeks with a partial ACL injury, but he may be out for longer if surgery’s needed.

So including Kilman in the England set-up going forward would give Southgate added peace of mind going into the World Cup as the Three Lions aim to avenge their Euro 2020 final defeat.

Kilman could’ve previously ended up playing for Scotland’s World Cup play-off opponents Ukraine as his parents hail from there.

Ukraine’s ex-boss, football icon Andriy Shevchenko, planned to lure Kilman into playing for his side before the Euros earlier this year.

The Athletic report that Kilman and his brother even met with Shevchenko to discuss the possibility.

But in the end, the attempt was thwarted by Fifa as the defender had already represented the Three Lions at Futsal level on 25 occasions before signing for Wolves.

Although Futsal is played indoors with a five-side team, with relaxed rules such as rolling substitutes and a smaller match-ball, Fifa recognises it as an official competitive match, voiding Kilman’s chances to play for Ukraine.