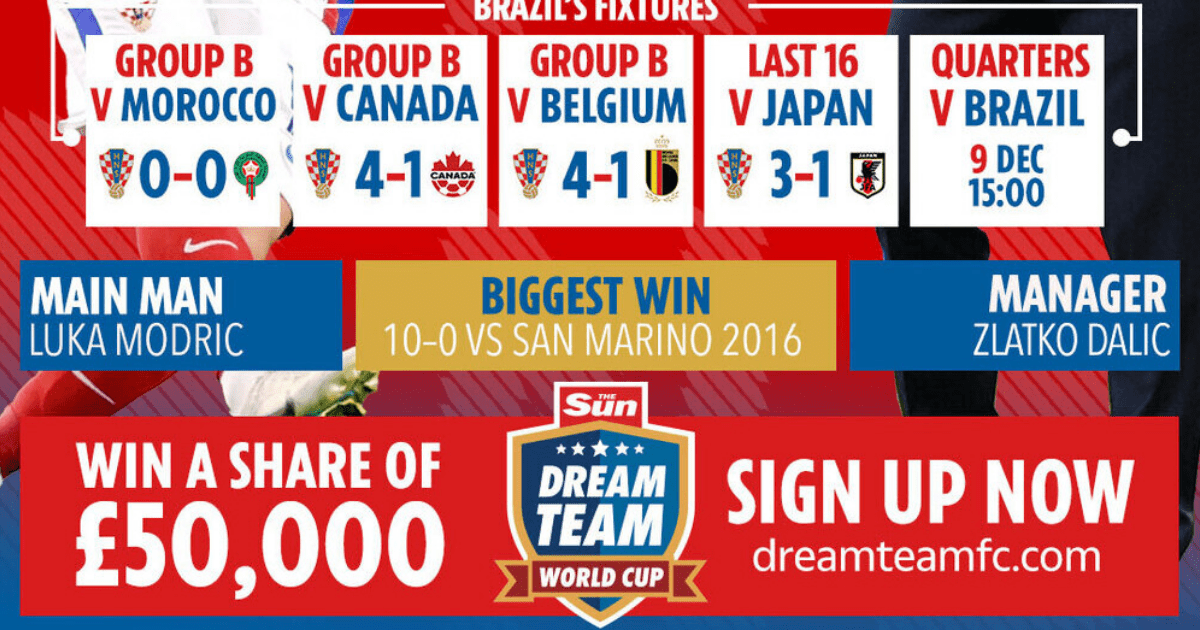 BRAZIL will continue their pursuit of a record-extending sixth World Cup when they take on Croatia in the quarter-finals TODAY.

The five-time champions produced a first-half demolition of South Korea to book their place in the last-eight with a 4-1 victory.

And now they come up against a side they have never lost to in their history.

Croatia are bidding to shock the world and reach the semi-finals for a second time in a row after finishing as runners-up four years ago.

They edged past Japan on penalties in the last round to clinch a quarter-final spot.

But most are anticipating Brazil to be a step too far for Luka Modric and Co.

How did they get here?

Brazil secured qualification from Group G with a game to spare following wins over Serbia and Switzerland.

Tite’s much-changed side were then stunned by Cameroon as they lost 1-0, but the five-time world champions still topped their group.

And a comprehensive 4-1 victory over South Korea in the last-16 has ensured they remain the favourites to lift the trophy on December 18.

Meanwhile, Croatia faced a tougher route through to the quarter-finals, drawing with Morocco and Belgium and beating Canada on their way to second place in Group F.

The runners-up from 2018 were then taken to penalties by Japan in the second round, but came through the dreaded spot kicks to set up a clash with Brazil.

What is the team news and any injuries to worry about?

Croatian left-back Borna Sosa is set to return from illness to take the place of Borna Barisic, but Josip Stanisic is expected to remain unavailable due to a muscle injury.

Luka Modric, Mateo Kovacic, Dejan Lovren and Barisic will miss the semi-finals if they pick up bookings on their way to victory.

Gabriel Jesus and Alex Telles are out of the rest of the World Cup after picking up injuries, with Alex Sandro also a doubt due to a hip issue.

Neymar is fit after returning from his ankle injury to start the win over South Korea.

Eder Militao is one booking away from missing the semi-finals, with Fred and Bruno Guimaraes also a caution away from suspension. 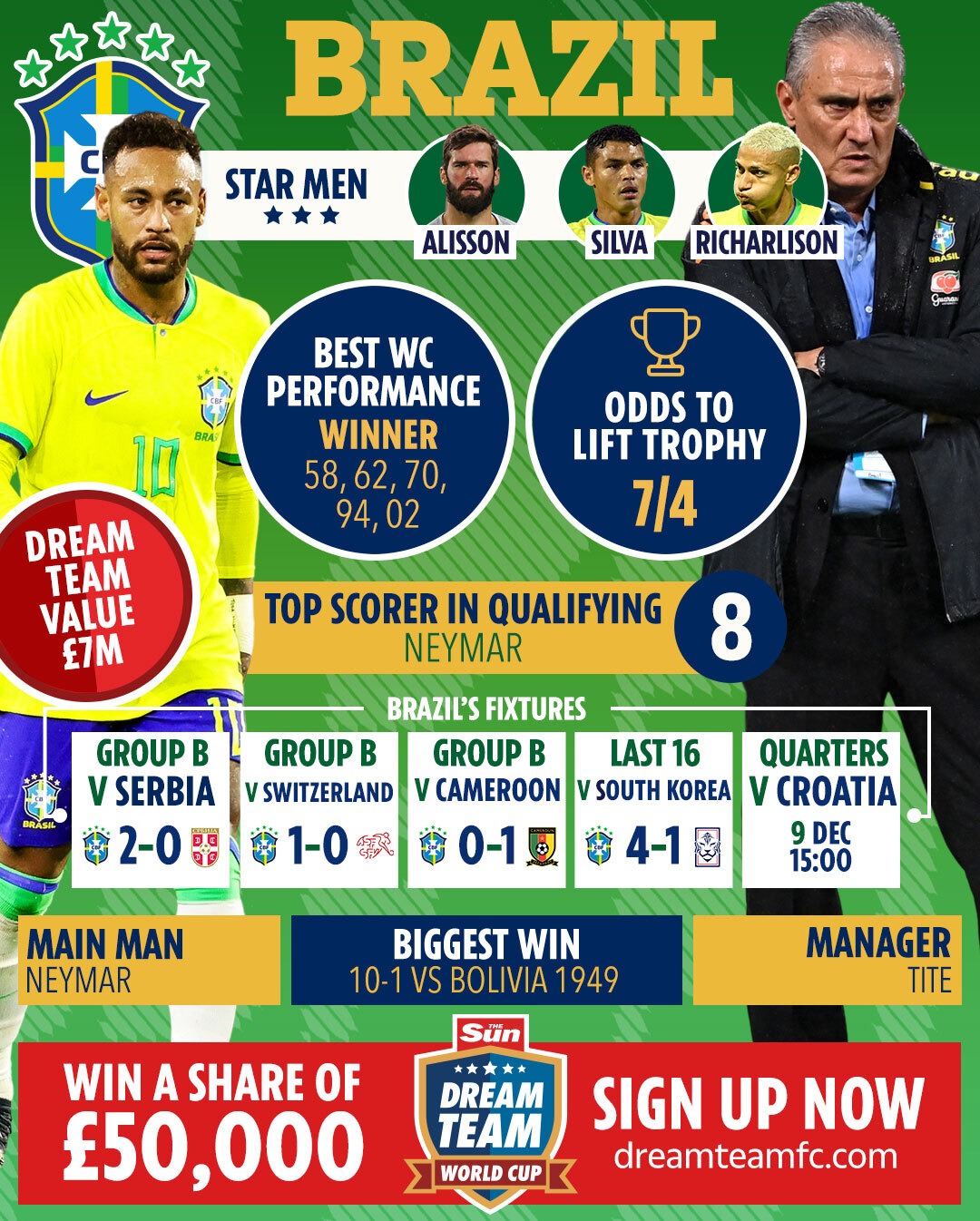 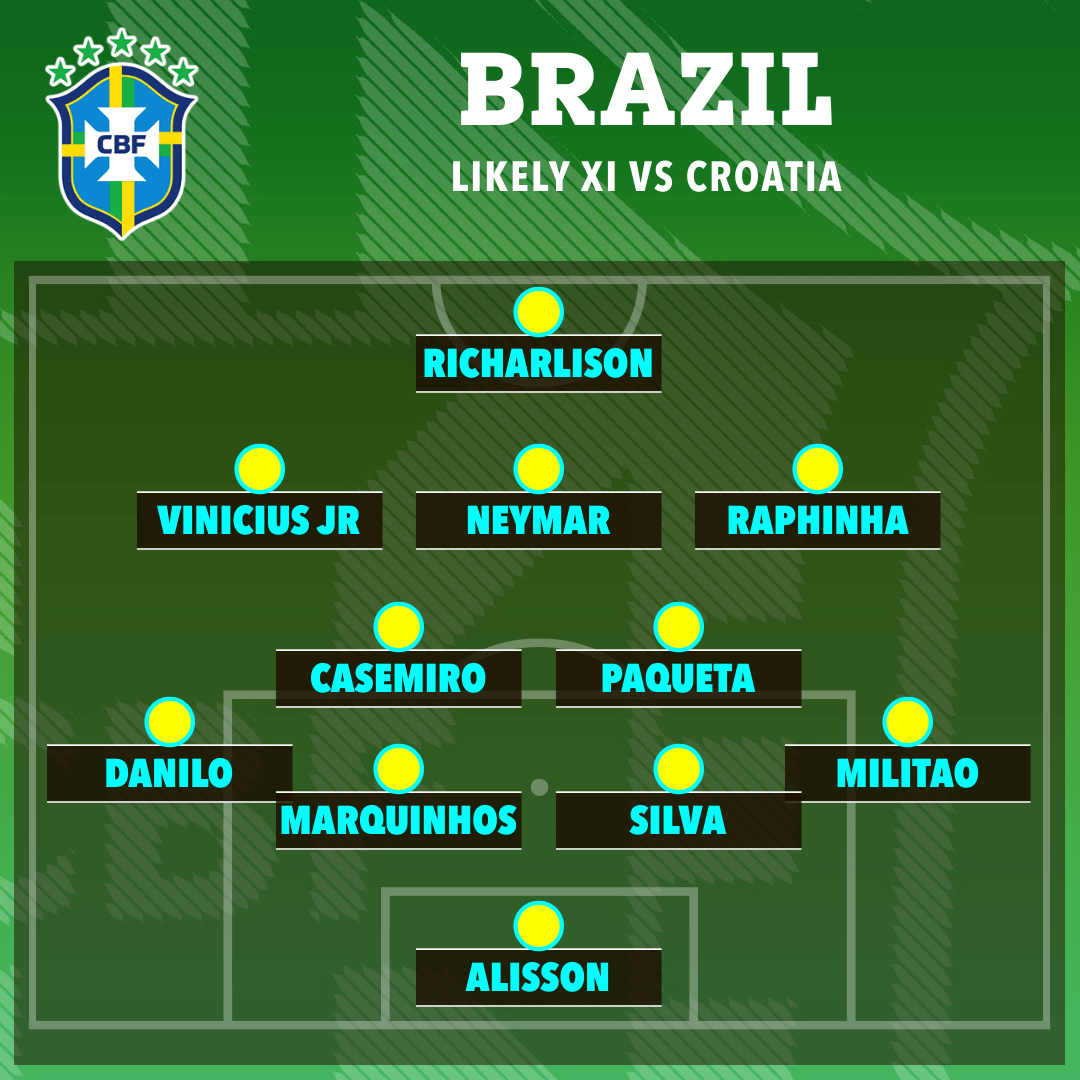 How Brazil are expected to line up against Croatia

Who will be the star men?

Vinicus Jr and Richarlison have been the star men for Brazil at this World Cup so far.

Richarlison, 25, has bagged three goals and led the line superbly for Tite’s side, while Vinicius has scored one and assisted two more and is a constant thorn in the side of opposition teams.

Meanwhile, Croatia’s main threat comes from a little further back in the form of their midfield trio.

Modric, Kovacic and Marcelo Brozovic make up a mean triad in the middle of the pitch, with Ivan Perisic arguably their most potent goal threat in the final third.

What’s the head to head?

Croatia have never beaten Brazil in their history.

The two nations have faced off four times in the past, with Brazil winning three and the other ending in a draw.

They drew 1-1 in an international friendly 17 years ago but since then have also met twice at the World Cup.

Brazil won 1-0 in the group stage in 2006 as Kaka scored the only goal, before the South Americans once again came out on top eight years later in the opening game of the 2014 tournament – claiming a 3-1 win.

And in their most recent clash four years ago, Brazil were victorious again as Neymar and Roberto Firmino netted in a 2-0 triumph.

Both sides have conceded just two goals each at the tournament so far so expect a low scoring game with Brazil edging it. 1-0 Brazil.

When is Croatia vs Brazil?

Yes, you can watch Croatia vs Brazil for FREE, so long as you have a valid TV licence.