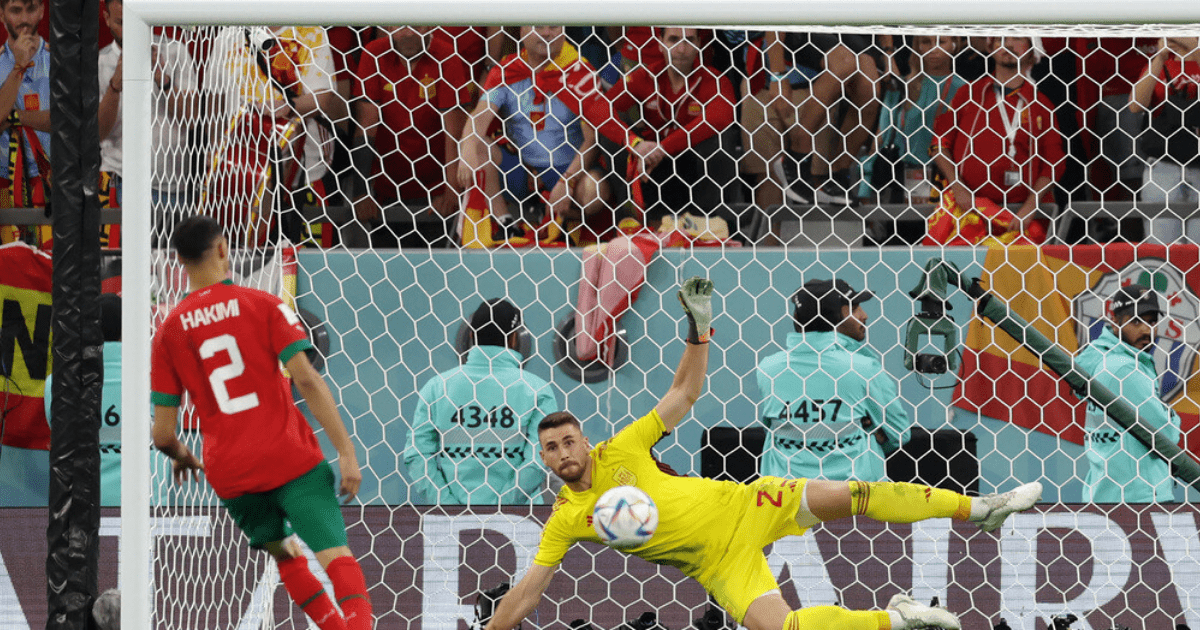 FANS were left in disbelief as Achraf Hakimi dumped Spain out of the World Cup with an outrageous Panenka penalty.

The Morocco star stepped up to take a crunch spot-kick for his country in today’s World Cup last-16 tie.

Hakimi, who was born in Spain but chose to play for his parents’ nation, confidently slotted home to send Morocco to their first-ever quarter-finals.

And he even celebrated with an incredible ‘penguin’ dance before being mobbed by teammates.

Paris Saint-Germain teammate Kylian Mbappe was the first to congratulate Hakimi, posting emojis of a penguin and a crown on Twitter.

Piers Morgan then hailed the right-back’s calmness on the big stage, adding: “To pull a panenka at THAT moment, under THAT pressure… wow… coolest dude in world football.”

And football fans were equally gracious as they praised Hakimi’s stunning piece of skill.

One declared: “He has got nerves of steel! Man just did a panenka to win it for them!”

Another said: “Hakimi dumping out the country of his birth, imagine that pressure and responsibility.”

One noted: “Can’t get better than this honestly.”

Former England star Joe Cole was full of praise for Hakimi afterwards, saying on ITV: “To do that, he’s show there, he’s just gone wallop, sat him down and said ‘we’re going to the quarters’.”

Cole added: “It’s a real honour and privilege to be here in front of all these Morocco fans and the emotion is palpable.

“This is why we love football. I said before the shootout, they were heroes whatever happened, but football is about moments.

“I’ve never taken a penalty, certainly not at this level. Unbelievable. I just can’t believe this, my eyes keep getting drawn towards the fans and the party going on.

“I don’t know when it’s going to stop tonight.”