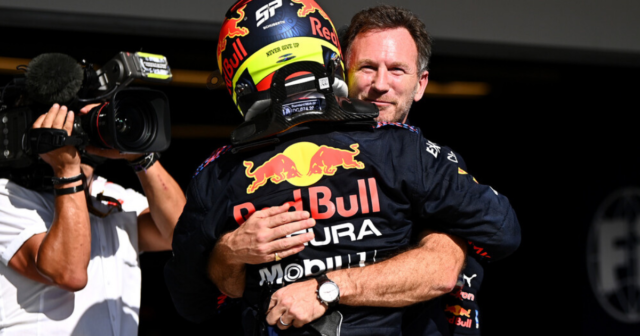 CHRISTIAN HORNER has admitted that he ‘aged about 25 years’ during the climax to last night’s thrilling US Grand Prix.

The Red Bull boss could only watch and hope as Max Verstappen was chased down by Mercedes rival Lewis Hamilton.

Despite his ageing tyres, Verstappen somehow managed to stay out of DRS range as the race reached its crescendo, finishing just a second before his rival.

Following the race, in which Red Bull’s Sergio Perez also grabbed third, Horner told Sky Sports that he ‘aged about 25 years’ during the closing stages.

He then added: “I really didn’t think he was going to pull that off.

“Lewis had eight laps newer tyres, and the first set of hard tyres that came off were pretty much down to the canvas.

“We were thinking we’re not going to have much at the end here but Max managed that tyre in the last stint.

“You know Lewis at the end of the race is so strong and he had gone long and got himself an advantage.

“I think to lose in the last few laps would have been really painful but Max held on, he did a great job, managed the job really smartly and had just about enough at the end there.”

Verstappen himself described the last few laps as ‘fun’ and his victory ‘incredible’.

He said: “Of course we lost out in the start so we had to try and do something else,.

“The tyre wear is quite high around this track, we went aggressive and I was not sure it was going to work but the last few laps were fun. A bit sideways through the high-speed corners but super happy to hang on.

“It was exciting. The whole race the pressure was on, not knowing how quick Lewis was going to get you. It’s incredible to win here.”

Hamilton, 36, said: “We gave it everything we had and they were just quicker than us this weekend, for whatever reason.

“I thought for a second that we might be able to win the race.”