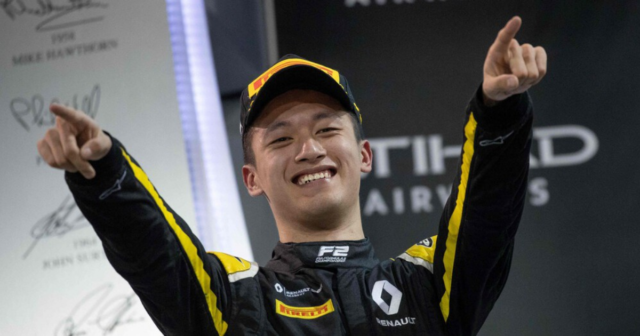 GUANYU ZHOU has made history after becoming the first Chinese driver to sign with a Formula 1 team as he joins Alfa Romeo for the 2022 season.

reported last month that the 22-year-old was set to partner Valtteri Bottas by claiming the team’s second seat for next year.

And now he has formally confirmed the rumours with an emotional message on social media.

“Lots of emotions going through my mind right now, I’m just so grateful for this opportunity.

“Thanks to everyone who believed me supported me on this journey. #F1 #TeamZHOU.”

Zhou is currently second in the Formula 2 championship and also part of the Alpine young driver programme.

He is only the second driver from mainland China to get behind the wheel of an F1 car after Ma Quinghua drove in five practice sessions across 2012 and 2013 with HRT and Caterham.

Zhou, who was previously part of Ferrari‘s Driver Academy, was told he is free to leave Alpine in pursuit of his F1 dream as they are unwilling to replace either Fernando Alonso or Esteban Ocon.

Zhou, who was won three F2 races this year, replaces Antonio Giovinazzi on the F1 grid as the Italian finds himself without a seat for next season.

The announcement of Zhou means the 2022 F1 grid has now been completed as all 20 drivers have been announced.

Bottas is leaving Mercedes to join Alfa Romeo and will take over from the retiring Kimi Raikkonen.

Briton George Russell will replace Bottas in the second Mercedes car as he lines up alongside compatriot Lewis Hamilton.

The only other change for the 2022 season sees former Red Bull driver Alex Albon come in for Russell at Williams alongside Nicholas Latifi.

Red Bull are sticking with Max Verstappen and Sergio Perez, with Ferrari also keeping faith with their duo of Charles Leclerc and Carlos Sainz.

McLaren stay put with Lando Norris and Daniel Ricciardo for another year, with Alpine pair Fernando Alonso and Esteban Ocon also remaining for the 2022 season.

AlphaTauri will continue with Pierre Gasly and Yuki Tsunoda, Aston Martin with Sebastian Vettel and Lance Stroll, and Haas with Nikita Mazepin and Mick Schumacher.