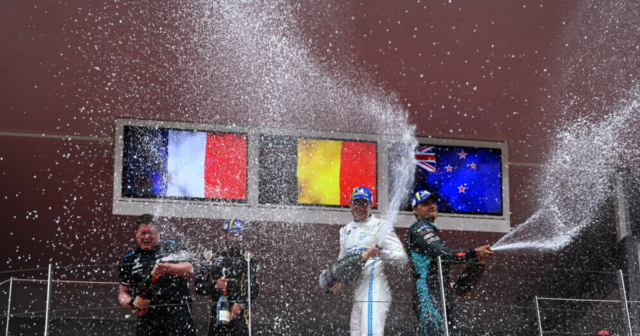 The Mercedes driver stormed to the top of the driver standings after picking up his first win of the season at the Monaco EPrix last week.

But after watching teammate Nick De Vries win the championship while slumping to 9th in the driver standings last year, the Belgian is confident his luck has changed.

The former Formula One McLaren driver said: “Last year was quite a random season.

“There were a couple of occasions where I had my share of bad luck and lost out on big points.

“That’s the way it went, you can’t change it any more and this year I want to leave no stone unturned and leave everything right from my side.

“We are almost half way so there is still a long way to go and you have seen in Formula E things can change very quickly and turn around quite drastically.

“I am not really focussing on the Championship lead, I am just taking it race by race which I have been doing since the start of the year and the key thing is to be consistent.

“As long as I keep doing that job I know I will be able to score points and that is the main focus at the moment and we will see where we end up a bit later.”

Despite Vandoorne’s upturn in form, defending champion and teammate De Vries has struggled so far this season.

After winning the first race of the season in Diriyah, the Dutch driver has scored just one point in the last three races.

But Vandoorne is confident De Vries will bounce back just in a similar way he has this season.

The 30-year-old added: “From Nick’s side I think he is just going through a rough patch which is easy to go through in Formula E.

“If you’re not putting all the little pieces together you can quickly tumble down the order.

“Nick has got the speed and everything he needs to be fighting at the right again.

“ I am convinced he will turn things around and strike back in his own way very soon.”

Catch-up on all the information as the series builds up to the 2022 London E-Prix, which returns this year on 30 & 31 July: https://www.fiaformulae.com/en/championship/race-calendar/2021-2022/london