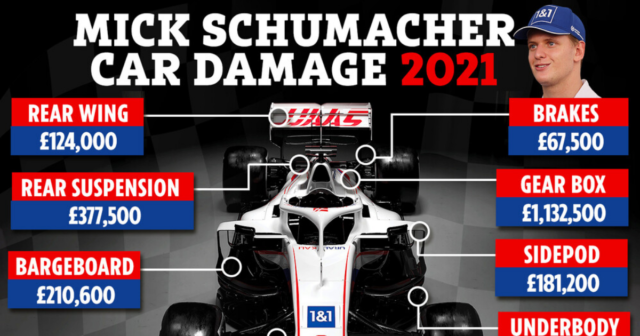 MICK SCHUMACHER has been revealed as F1’s crash king after racking up a whopping £4MILLION repair bill last season.

The Haas driver caused more damage to his car than any other man on the grid as he failed to score a single point all year.

He cost his team over £1m in just one race when he crashed heavily on lap 10 of the inaugural Saudi Arabian Grand Prix.

The race had to be red-flagged as track marshals scraped his VF-21 from the barriers at Turn 23.

He needed EIGHT new front wings and NINE new sets of suspension across the 22-race calendar.

The son of F1 legend Michael joined his team-mate Nikita Mazepin in failing to score a point during the season.

And it was touch-and-go as to whether the Haas drivers would even be able to compete in the year-end Abu Dhabi Grand Prix. 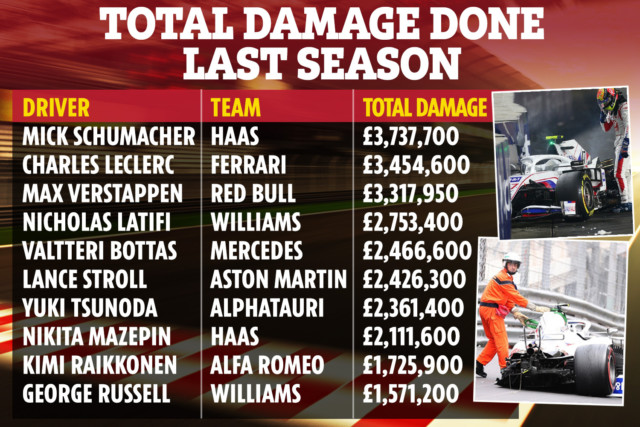 After Schumacher’s shunt in Saudi Arabia, team boss Guenther Steiner admitted: “We’ve used everything we have left. If we crash in practice before the last race, it’ll be tight.”

The F1 rookie is seen as a talent on the grid and his struggles have as much to do with a shoddy car as they do with his inexperience.

And closing out the top three is champ Max Verstappen.

The Red Bull superstar needed over £3.3m in servicing on his way to snatching the world title from Lewis Hamilton.

The Mercedes superstar doesn’t even feature in the top ten.

He was only the 13th most expensive driver on the grid with just over £1m in repairs.