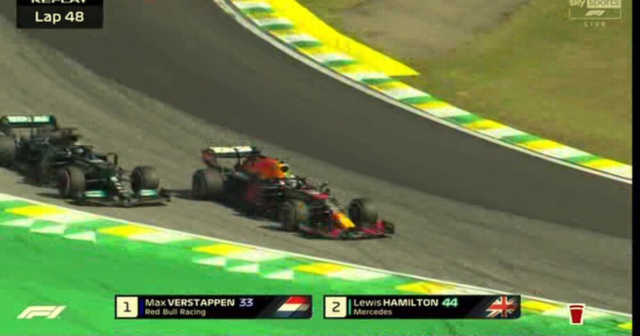 MERCEDES have had their request to review Max Verstappen’s move on Lewis Hamilton DENIED by Formula One stewards.

The incident occurred on lap 48 of the Brazil GP as Verstappen cut in front of Hamilton, forcing both men off the track. 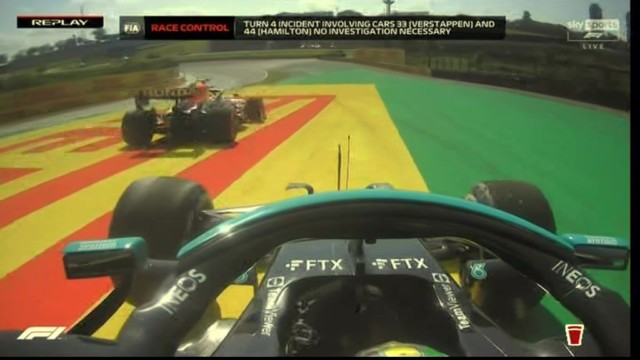 Both drivers were forced off the track

The Brit ultimately went on to win the race and cut Verstappen’s lead in the driver standings to just 14 points.

He charged up from tenth on the grid, passing Verstappen en route, to keep his hopes of a record eighth championship alive.

But Mercedes still pressed for F1 stewards to review the footage with Verstappen possibly facing a penalty.

After FOUR days of deliberation the request has now been denied and Verstappen escapes without punishment.

New footage had emerged from the Dutchman’s on-board camera of the clash with Hamilton, but that has been deemed ‘relevant’ and not ‘significant’ by the FIA.

A spokesperson said: “[Mercedes’] position is that the new footage provides sufficient information for the stewards to come to an altogether different conclusion to the one they did previously.

“However, the stewards determine that the footage shows nothing exceptional that is particularly different form the other angles that were available to them at the time.

“Thus, the stewards determine that the footage, here, is not ‘significant’.”

Despite lodging for a review, Mercedes team principal Toto Wolff has admitted he is not surprised by the decision.

He said: “Completely expected. We wanted to trigger a discussion around it because probably it will be a theme in the next few races and I think that objective is achieved. We didn’t really think it would go any further.”

Meanwhile Red Bull chief Christian Horner quipped: “It’s obviously the right decision because it would have opened a Pandora’s box of a whole load of incidents at that race.”

Horner also went on to advise Hamilton on how he should have approached Verstappen’s move, and looked ahead to this weekend’s Qatar GP.

He continued: “I was surprised at the hearing in the first place because we saw many incidents at Turn 4 both in the sprint race and in the actual Grand Prix.

“It was just two drivers probably out-braking themselves. If Lewis had been smart, he would have gone for the cutback like Checo had with Valtteri.