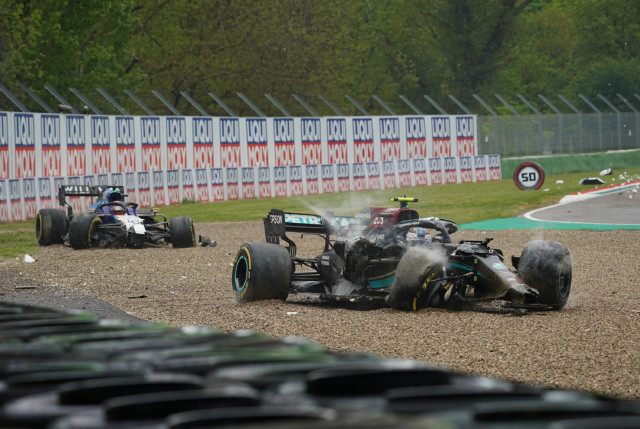 GEORGE RUSSELL furiously called Valtteri Bottas a ‘f***ing p****’ after the pair crashed into one another at the Emilia-Romagna Grand Prix.

The British driver attempted to pass the Mercedes on the high-speed approach to the opening corner in Imola. 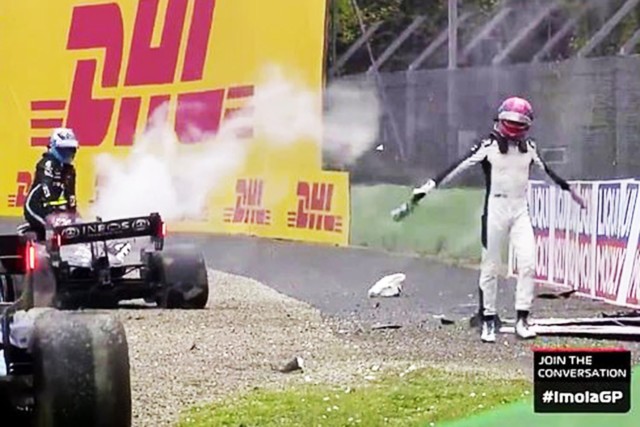 But Russell’s front tyre was forced onto the wet grass which saw him lose control of the car, collide with Bottas and end both of their hopes of world championship points at the end of the day.

Immediately after both cars crashed into the wall, a fuming Russell got straight onto his team radio to rage at Bottas.

Russell then leapt out of his car and stormed over to Bottas’ damaged machine before giving him the middle finger right in front of his face.

He also appeared to slap the Finn on the helmet as his anger boiled over at the Italian circuit.

The Williams driver is a Mercedes junior academy prospect who is hoping to be promoted to one of the team’s two F1 seats in the near future.

After the crash, the race was stopped on lap 34 of 63 as the large amount of debris was removed from the track.

Reacting on social media, one person said: “So after a 200mph+ crash, in his moment of fury, GPDA director George Russell decides to wack Valterri Bottas on the head before he knows Bottas has any issues. This is the man that is expected to drive the Mercedes F1 team to future victories?”

And another added: “Neither Russell or Bottas were at fault. Russell had the run with DRS and rightly went for it. Bottas was taking the normal racing line. The unusual circumstance was that it was also the only dry line.” 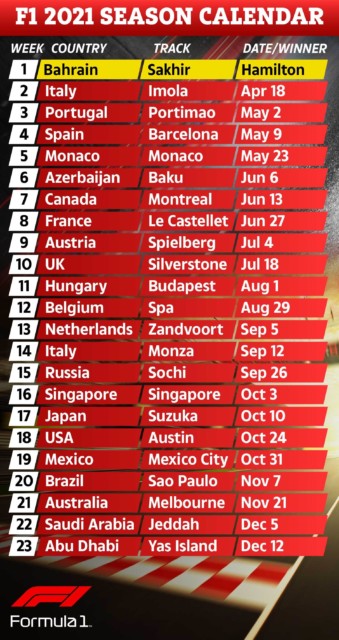 Max Verstappen went on to win the race after a brilliant start saw him overtake both teammate Sergio Perez and pole position starter Lewis Hamilton.

The Brit spun off the track and looked to be all but out of the race on lap 31, but fought back excellently to secure a podium and pick up an extra point for the fastest lap of the day.