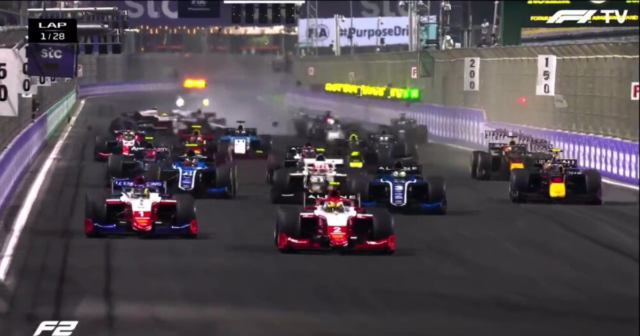 ENZO FITTIPALDI smashed into the back of Theo Pourchaire after he stalled on the grid at the beginning of the F2 Saudi Arabian Grand Prix.

Pourchaire started third on the grid but stalled straight away.

A number of drivers avoided the ART driver but Fittipaldi had already picked up considerable speed and could not avoid the collision.

Fittipaldi was sent crashing into the barriers with parts of his car flying over the edge of the track before the car came to a halt.

TV broadcasters have refused to show replays of the crash given its shocking nature.

The red flag was shown and cars returned to the pits as the debris was cleared and the two drivers received medical attention.

Both Pourchaire and Fittipaldi were taken to hospital via helicopter but are said to have given a positive hand signal.

But there is no news on the potential injuries sustained by either driver – just that they are concious.

The restart was scheduled for 3:45 pm but the race will be shortened to allow the F1 Grand Prix to start at 6:30 pm.

But the delay means the scheduled minute’s silence for Williams founder Sir Frank Williams – who died this week – will not take place.

A Williams FW07 was also planned to drive a tribute lap around the track in honour of the F1 great, with images of Williams projected onto the starting grid.

Advertisement. Scroll to continue reading.
In this article:atthebeginning, enzofittipaldi, thegrid