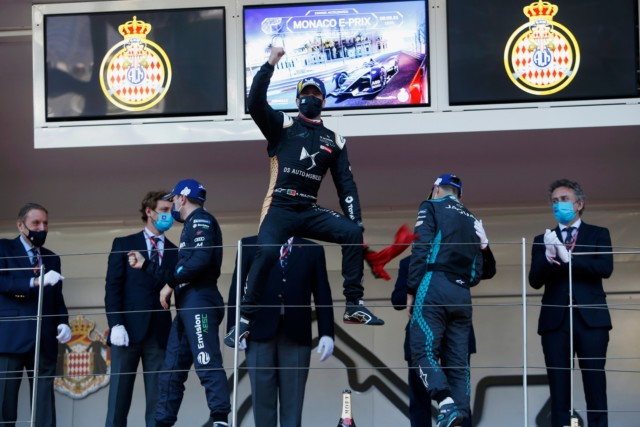 DEFENDING CHAMPION Antonio Felix Da Costa won his first race of the season on the FINAL lap of the Monaco ePrix.

The Portuguese driver passed Jaguar’s Mitch Evans with only a handful of corners remaining after a stunning overtake.

Da Costa said he was “crying” as he stepped out of his car and hugged his teammates from the garage.

Evans was in the lead of the race but he was struggling on the final lap of the race.

Not only did Evans lose the lead of the race, but Virgin’s Robin Frijns beat him to the line to take second place, leaving Evans on the final step of the podium in third.

Da Costa said: “I knew the race would be so hard. We played the perfect strategy.

“Oh my god, how many leaders did we have in the Monaco ePrix? You don’t get that in other motorsport series.

“It was definitiely a risky move and I didn’t think I would make the corner but credit to Mitch Evans, I love racing with these guys.”

Frijns now leads the championship by five points after his last-gasp overtake on the final straight.

FE heads to Mexico City next time around for a double header on the 19th and 20th June.