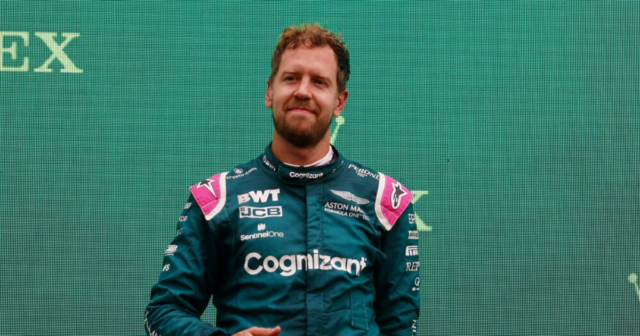 SEBASTIAN VETTEL leaves Formula 1 at the end of this season a true great.

The four-time world champion will go down in history as a racing legend having claimed successive drivers’ championships between 2010 and 2013. 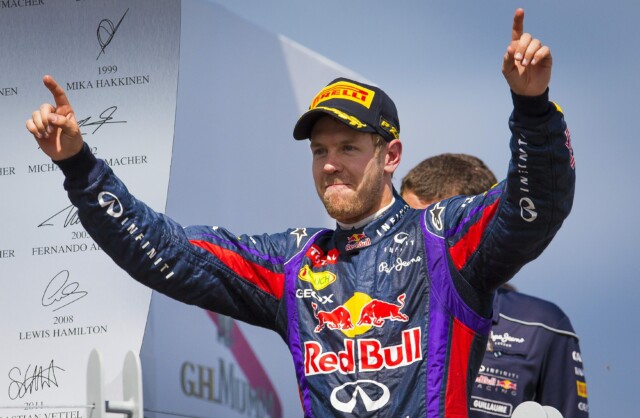 He has won 53 F1 races and managed 122 podiums during a stunning 15-year career.

But in recent years his off-track work has garnered more attention than the racing itself.

Here are some of the initiatives and moments away from racing which have shown Vettel to be one of the most inspirational figures in the sport’s history. 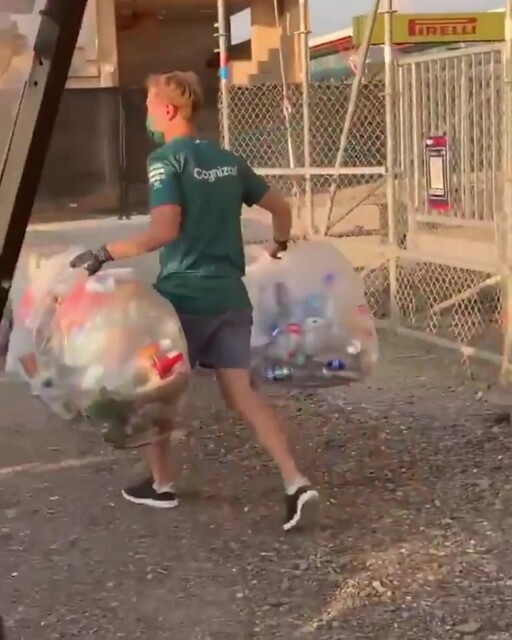 Sunday evening at Silverstone. The #BritishGP weekend is over.

But for Seb, the race for the planet never ends.

Following the 2021 British Grand Prix, Vettel was filmed helping with the litter picking as stewards cleared the messy grandstands.

The German driver had been forced to retire from the race earlier on that day.

But that did not stop him from returning to the side of the circuit to nobly carry bags of rubbish away in what was a very nice touch.

The gesture came as he prepared to speak up about how crucial sustainability is to the world’s future.

“I’ve noticed at the tracks there is a lot of stuff lying around after the races and I think it was a good opportunity, also for myself, to see the problem we are facing.” 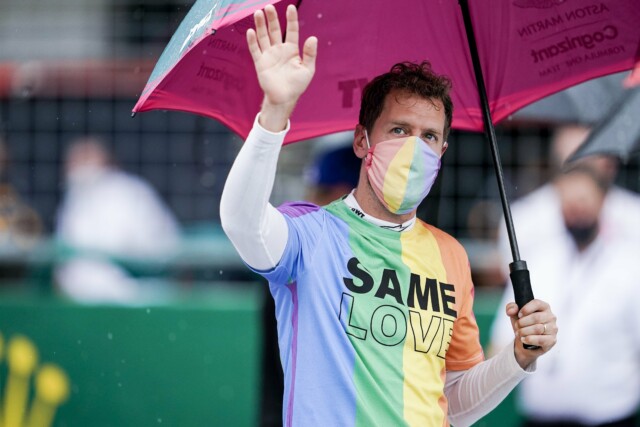 Another cause Vettel has taken to overtly supporting in the past few years is rights for the LGBTQ community.

The multiple world champion has been wearing rainbow-coloured shirts ahead of races with statements such as “same love” written on them.

And he has also vocalised his desire to see all sorts of discrimination eradicated across the world.

Speaking to The Race in December, he said: “There are certain topics too big to neglect. We all agree – and it doesn’t matter where you come from – that it’s only fair to treat people equally.

“I feel our sport could apply a lot of pressure and could be of immense help to spread that fairness around the globe even more.

I think it’s not right to judge people or apply certain laws which differentiate people just because they happen to love a man instead of a woman or a woman instead of a man.

“That’s one thing, or the way they look, or their background or the things they believe in. I think any form of separation is wrong.”

“You've talked a lot about energy…does that make you a hypocrite?”

“When I get out of the car, of course I’m thinking, is this something that we should do?”

Join us at 10.40pm on @BBCOne. pic.twitter.com/LVMMs4CuvY

Vettel appeared on BBC’s Question Time back in May and discussed – among many other things – the ongoing climate crisis.

Speaking on the show, he said: “Every time I step in the car, I love it.

“When I get out of the car, of course I’m thinking is this something we should do, travel the world, wasting resources?”

At a separate event, he then went on to qualify why it is he continues to race despite the impact the sport has on the climate.

“I feel you could say I’m a hypocrite because I am doing something opposite to what I’m saying we need to look out for.

“But I think we will not change people’s opinion by forbidding something, so forbidding me to drive the car I think will not have the effect we like.” 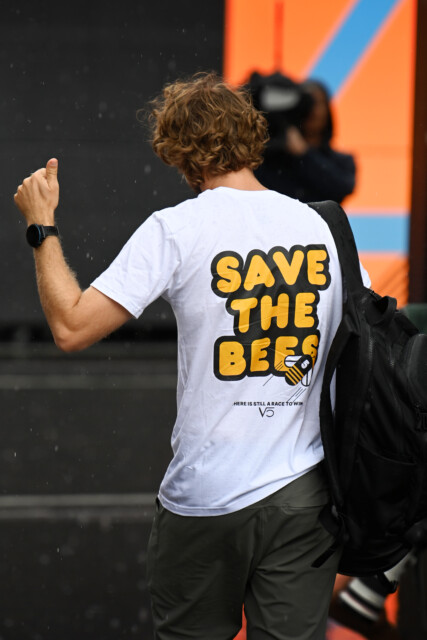 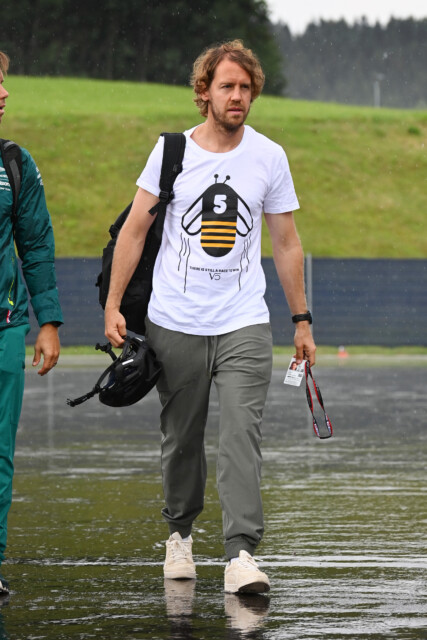 The German feels this is an important cause which needs attention 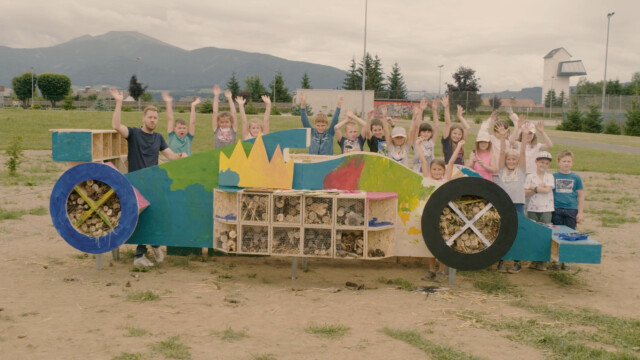 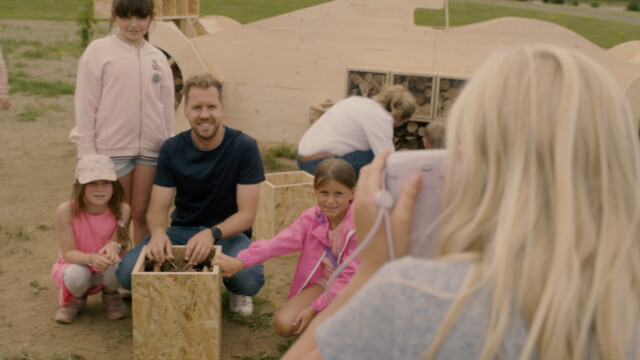 The F1 driver was thrilled with how the project turned out

In 2021, Vettel worked with children in Austria to help them build a hotel for bees – which took the shape of a race car.

After the unveiling, he said: “This morning was very exciting because I was out close to the track on a field and we installed a racing car – but a very unconventional racing car because it is a hotel for insects and bees.

“I had a group of kids with me to build up the racing car. The idea behind it is to build up a little more space for insects, and in particular bees, to have more space where they can flourish and live.

“Hopefully there will be a lots of flowers growing in the future and a lot of bees coming to their new home – it will be free of charge!”

The insect has become endangered in recent years and Vettel has made it his mission to raise awareness.

At the Austrian GP last month, he wore a ‘save the bees’ shirt with the slogan: “There’s still a race to win”. 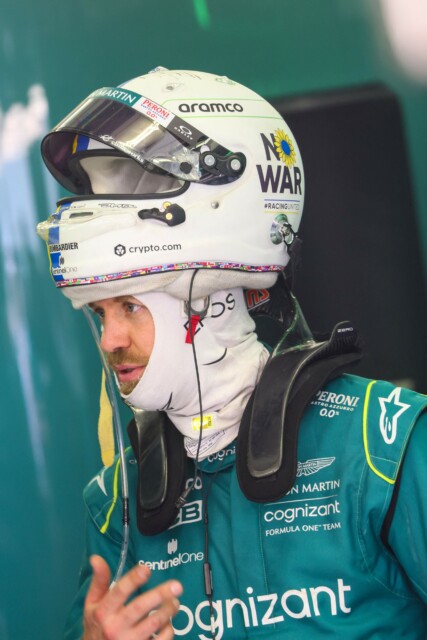 Vettel has had “No war” written on his helmet this season 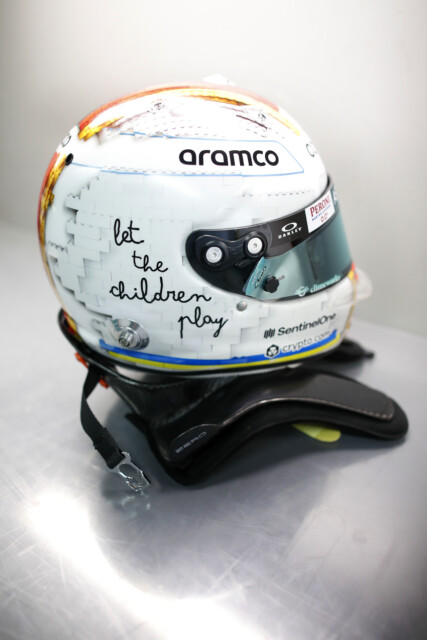 Following Russia’s invasion of Ukraine, but before F1 announced they would be cancelling the 2022 Russian Grand Prix, Vettel stated he would boycott the race should it go ahead.

Speaking in February, he said: “My own opinion is I should not go, I will not go. I think it’s wrong to race in that country.

“I’m sorry for the people, innocent people who are losing their lives, getting killed for stupid reasons under a very strange and mad leadership.

“I woke up again after this morning’s news, shocked. I think it’s horrible to see what is happening.”

Since then, he has had “no war” written on his helmet at F1 races this season, while at the Hungarian GP he had “let the children play” inscribed on the side.

Did you miss our previous article…
https://www.sportingexcitement.com/formula-1/how-f1-could-look-in-2023-after-transfer-blitz-with-albon-extending-with-williams-and-ricciardo-set-for-alpine-return/