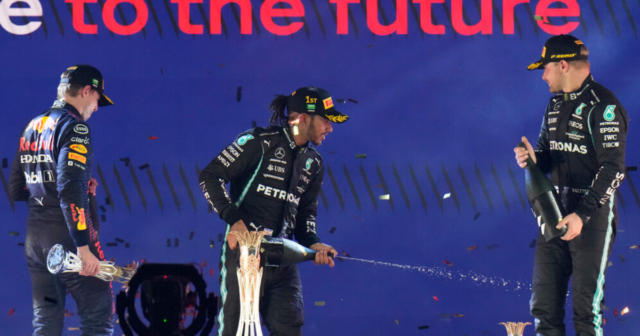 FURIOUS Max Verstappen stormed off the podium after seeing Lewis Hamilton draw level with him in the title race.

There is now just one race left with both men equal in the table.

And a feisty evening saw Verstappen end up colliding with Hamilton on the track during an intense battle for the lead.

Verstappen was clearly unhappy as he joined Hamilton on the podium after the race had ended.

As per usual, the top three racers – including Mercedes’ Valtteri Bottas – took their place on stage before being handed champagne bottles to spray each other.

But Verstappen stormed off the podium after receiving his, all the while refusing to make eye contact with Hamilton.

And the Dutch driver claimed afterwards there were a number of events in the race he ‘didn’t agree with’.

Verstappen told Sky Sports: “It was quite eventful. A lot of things happened which I don’t fully agree with but it is what it is.

“I tried on the track to give it all but the tyres weren’t lasting until the end.

“I think it was good for the end of the stint but I was lacking a bit of rubber at the end. But nevertheless [I was] still second.

“[For the collision] I slowed down, I wanted to let him [Hamilton] by, I was on the right but he didn’t want to overtake and we touched.

“I don’t really understand what happened there. It will be decided [at Abu Dhabi] hopefully we have a good weekend.

“[On being voted Driver of the Day] Luckily the fans have a clear mind about racing.

Hamilton was equally bemused by the collision, adding: “I don’t understand why he hit the brakes quite heavily so I ran into the back of him.

“It was a bit confusing.”